Antimony (Sb) (pronounced an’ti-mo’nee) ores are a silvery-white metal that are mined and then mixed with other metals to form Sb alloys or combined with oxygen to form antimony oxide. Antimony oxide is a white powder that is insoluble in water. Little Sb is currently mined in the United States. It is brought into this country from other countries for processing. However, there are companies in the United States that produce antimony as a by-product of smelting lead and other metals. When mixed into alloys, it is used in lead storage batteries, solder, sheet and pipe metal, bearings, castings, and pewter. Antimony oxides (primarily antimony trioxide) are used as fire retardants for plastics, textiles, rubber, adhesives, pigments, and paper. It is also used in paints, ceramics, semiconductors, fireworks, and explosives and as enamels for plastics, metal, glass.

Everyone is exposed to low levels of Sb in the environment.  Antimony and its compounds are naturally present in the Earth’s crust and are released into the environment by natural discharges such as windblown dust, volcanic eruptions, sea spray, forest fires, and biogenic sources. Antimony is also released into the environment from industry and is found in air near industries that process or release it, such as smelters, coal-fired plants, and refuse incinerators. Workers in industries that process it or use antimony ore may be exposed to higher levels.

In the air, Sb is attached to very small particles
that may stay in the air for many days.
Most Sb ends up in soil, where it attaches
strongly to particles that contain iron,
manganese, or aluminum. Antimony is
found at low levels in some rivers, lakes, and streams.

Antimony toxicity is dependent on the exposure dose, duration, route (breathing, eating, drinking, or skin contact), other chemical exposures, age, sex, nutritional status, family traits, lifestyle, and state of health. Toxic exposure can take place in the mining and extraction industries. Antimony released from smelters may remain in particulate quantities in the air, some of which reaches the soil during rainfall – where it attaches strongly to particles containing iron, manganese, or aluminum. 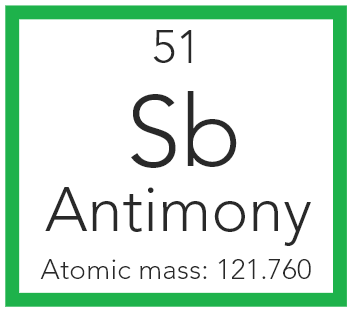 Because Sb is found naturally in the environment, the general population is constantly exposed to low levels daily primarily from food and drinking water. The EPA allows 0.006 parts of Sb per million parts of drinking water (0.006 ppm). The EPA requires that discharges or spills into the environment of 5,000 pounds or more of Sb be reported.

Antimony has no biological role in the human body, though in small doses it is said to stimulate metabolism. Antimony is in the same periodic group as nitrogen, phosphorus and arsenic, and exhibits toxic properties and biological activity similar to that of arsenic. Like arsenic, it is often described as a metalloid element. Acute (short-term) exposure to Sb by inhalation in humans results in effects on the skin and eyes. Respiratory effects, such as inflammation of the lungs, chronic bronchitis, and chronic emphysema, are the primary effects noted from chronic (long-term) exposure to antimony in humans via inhalation. Acute excess exposure also causes loss of hair, dry scaly skin and weight loss. Damage to the heart, liver and kidney can occur and death from myocardial failure may follow. With chronic exposure, there are effects on the skin (antimony spots), mucous membrane (irritation) and pneumoconiosis.

The British Pharmaceutical Codex from 1907 points out its highly poisonous nature, but indicates that certain forms of Sb were used in various forms as a medicine, for instance to induce vomiting and as a diaphoretic (to induce sweating). It seems that antimony chloride was used (rarely) as a medicine of last resort against “poisoned wounds and cancerous growths”.

One study indicated that women workers exposed in an Sb plant experienced a greater incidence of spontaneous abortions than did a control group of non-exposed working women. A high rate of premature deliveries among women workers in Sb smelting and processing was also observed.

The EPA’s Office of Air Quality Planning and Standards, for a hazard ranking under Section 112(g) of the Clean Air Act Amendments, considers Sb pentafluoride to be a “high concern” pollutant based on severe acute toxicity.

Daily consumption of Sb is estimated at 0.1 mg and is usually poorly absorbed and eliminated in the feces and urine. However, some Sb is stored in the skin, eyes, liver, spleen, kidneys, heart, blood, and connective tissues.

Exposure to antimony at high levels can result in a variety of adverse health effects. The primary effects from chronic (long-term) exposure to antimony in humans are respiratory effects that include antimony pneumoconiosis (inflammation of the lungs due to irritation caused by the inhalation of dust), alterations in pulmonary function, chronic bronchitis, chronic emphysema, inactive tuberculosis, pleural adhesions, and irritation. Other effects noted in humans chronically exposed to antimony by inhalation are cardiovascular effects (increased blood pressure, altered EKG readings and heart muscle damage) and gastrointestinal disorders such as stomach pain, diarrhea, vomiting, and stomach ulcers. Skin effects consist of a condition known as antimony spots, which is a rash consisting of pustules around sweat and sebaceous glands, while effects on the eye include ocular conjunctivitis.

In one human study, inhalation exposure to Sb did not affect the incidence of cancer in workers employed for 9 to 31 years. Lung tumors have been observed in rats exposed to Sb-trioxide by inhalation. The EPA, however, has not classified antimony for carcinogenicity.

Sulfur containing amino acids; calcium, iodine, selenium, zinc and vitamin C are antagonistic for Sb uptake and retention. EDTA has been clinically shown to be an effective IV chelating agent for excess Sb.