Binaural beats are a tone created in the brain when it is presented with two different frequencies at the same time. When signals of two different frequencies (sounds) are presented, one to each ear, the brain detects phase differences between these signals. A perceptual integration of the two signals is perceived in the brain, producing the sensation of a third “beat”. The binaural beat is perceived as a fluctuating rhythm at the frequency of the difference between the two auditory inputs.

The binaural hearing beats occur in the brain stem in response to auditory stimulation produced by two pure tones of slightly similar frequency, each in a different ear. The upper grove located in the brainstem is responsible for interpreting the frequency difference, which is called the binaural tone. For example, if we issue a 110 Hz tone in the right ear and another 115 Hz tone in the left ear, the frequency difference between the two will be 5 Hz, and this is the binaural tone.

​Binaural beats were discovered in 1839 by a German experimenter, H. W. Dove. Over the last several decades, the Monroe Institute (https://www.monroeinstitute.org/) has researched and utilized binaural beat technology as a therapeutic tool for enhancing consciousness and treating various disorders. The human ability to “hear” binaural beats appears to be the result of evolutionary adaptation. Many evolved species can detect binaural beats because of their brain structure. The frequencies at which binaural beats can be detected change depending upon the size of the species’ cranium. In humans, binaural beats can be detected when carrier tones are below approximately 1500 Hz. It is this innate ability of the brain to detect phase differences between the ears that enables the perception of binaural beats.

​Most studies of binaural beats use a technique called “masking” to hide the presence of the beating from conscious awareness. Pink and white noise are the most common masking agents utilized to disguise binaural beats, so the listener is unaware of their presence. The terms “pink” and “white” noise refer to how energy is distributed acoustically: pink noise is equal portions of energy per octave, whereas white noise is equal energy per frequency. When perceived by a listener, pink and white noise resemble a static-like sound like a television channel without a signal.

​Atwater, F. Holmes. Binaural beats and the regulation of arousal levels. Proceedings of the TANS 11 (2001).

Reedijk, Susan A., Anne Bolders, and Bernhard Hommel. The impact of binaural beats on creativity. Frontiers in human neuroscience 7 (2013): 786. 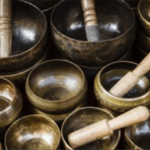