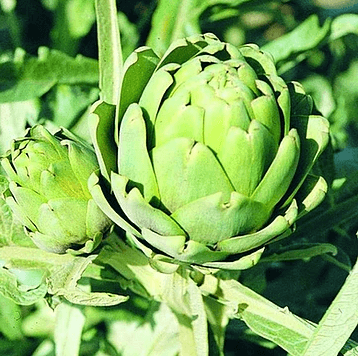 Globe artichokes (Cynara scolymus), a member of the milk thistle family, grows to a height of about 2 m and produces a large, violet-green flower head. The flower petals and fleshy flower bottoms are eaten as a vegetable throughout the world, which has led to its commercial cultivation in many parts of South and North America (chiefly California) as well as in Europe.

The artichoke was used as a food and medicine by the ancient Egyptians, Greeks, and Romans; in Rome, the artichoke was an important menu item at feasts. It wasn’t until the 15th century, however, that it made its appearance throughout Europe. Since then the leaf of Cynara scolymus has been used as an antimicrobial, anti-inflammatory, choleretic, hepatoprotective, cholesterol-lowering, lipid-lowering, and glucose-lowering substance.1

Artichokes are highly nutritious, being low in fat while rich in fiber, vitamins, minerals, and antioxidants. They are a naturally rich source of vitamins A, K, C, B-6, thiamine, riboflavin, niacin, folate, calcium, iron, zinc, potassium, magnesium, phosphorous and zinc. One medium artichoke contains almost 7 grams of fiber, which is 23 to 28% of the reference daily intake (RDI). These delicious thistles come with only 60 calories per medium artichoke and around 4 grams of protein — above average for a plant-based food.2

Globe artichokes rank among the most antioxidant-rich of all vegetables. One artichoke supplies 25% of the recommended daily requirement of vitamin C. Artichokes are also a great source of silymarin, a flavonoid antioxidant that is liver protective, as well as rutin, quercetin, and gallic acid.3

Historically and throughout Europe preparations of artichoke (extracts) have been used for bloating, nausea, and impairment of digestion. It is specifically indicated for “dyspeptic syndrome” though its proven lipid-lowering actions suggest that it may also be useful as a prophylactic against atherosclerosis.

The British Herbal Pharmacopoeia reported hepatoprotective and hepato-stimulating properties. The Merck Index reported the therapeutic category of cynarin, an active principle of artichoke, as choleretic. In numerous studies artichoke leaf has shown cholesterol-lowering and lipid-lowering activity in rats and humans. Human studies have also validated carminative, spasmolytic, anti-emetic, and choleretic actions. The African Pharmacopoeia indicates its use for the treatment of liver dysfunction and reported its diuretic and anti-atherosclerotic actions. The German Commission E approved artichoke leaf for dyspeptic problems due to its choleretic activity.

As a food, globe artichokes are an extremely nutritious, low-carb food that may provide numerous health benefits. However, research is mostly limited to studies using concentrated artichoke extract.

Furthermore, as a result of in vivo studies in rats, the Cynara scolymus leaf extract has been suggested to reduce lipid peroxidation6 and protein oxidation as well as increase glutathione peroxidase activity.7

Health-promoting properties of globe artichoke in preventing cardiovascular disease is primarily due to its lipidic and glycemic-reducing action.8 Artichoke extract has been shown to regulate excess lipids by decreasing LDL and increasing HDL cholesterol. 9, 10, 11, 12

Cynara scolymus leaf extract has also been shown to improve carbohydrate metabolism, and thus is potentially effective for type 2 diabetes.13, 14, 15, 16, 17, 18

Globe artichokes have become important as a medicinal herb in recent years following the discovery of cynarin. This bitter-tasting compound, which is found in the leaves, improves liver and gall bladder function, stimulates the secretion of digestive juices, especially bile, and lowers blood cholesterol levels. By its bitter materials Cynara scolymus strengthens the digestive procedures and stimulates the effective conversion of fats. Artichoke also contains the bioactive agents apigenin and luteolin.23

In traditional phytotherapy, all plants have both a physiological effect and psychoemotional effect. According to European phytotherapy, the psychoemotional nature of the artichoke expresses itself in completely opposite tendencies. On the one hand, the plant brings out extravagance, lavishness and over-abundance, while it also opposes such extravagance through the expression of self-restraint. Hence, the result is equilibrium between debauchery and self-restraint. Thus, the nature of this plant supports the mind in its tendency to find reconciliation between boundlessness and renouncement or between self-indulgence and self-denial. Within this equilibrium, thoughts and activities may be directed away from material pursuits towards something spiritually higher.

Globe artichokes can be steamed, boiled, grilled, roasted, or sautéed. They can also be stuffed or breaded, adding spices and other seasonings for an extra burst of flavor. Steaming is the most popular cooking method and usually takes 20 to 40 minutes, depending on the size. Alternatively, you can bake artichokes for 30 to 40 minutes at 350°F. Keep in mind that both the leaves and the heart can be eaten.

Once cooked, the outer leaves can be pulled off and dipped in sauce, such as aioli or herb butter. Simply remove the edible flesh from the leaves by pulling them through your teeth. Once the leaves are removed, carefully spoon out the fuzzy substance called the choke until you reach the heart. You can then scoop out the heart to eat alone or atop pizza or salad.

The history of the artichoke is a perfect example of science finally catching up to the longstanding traditional uses of a medicinal plant. While scientists still argue today over which specific chemical or group of chemicals is responsible for each documented beneficial action, the traditional uses for high cholesterol, as well as for liver, gallbladder, and digestive disorders, are being validated. While many Europeans still have to see their doctors for an artichoke extract prescription, concentrated natural leaf extracts and standardized extracts are widely available in the United States at health food stores.

Typical doses used in human research range from 300 to 2000 mg of artichoke leaf extract daily taken in divided doses. Side effects of artichoke extract are rare, though people with bile duct disorders and women who are pregnant, or breastfeeding, may wish to avoid it.

Gebhardt, Rolf. Antioxidative and protective properties of extracts from leaves of the artichoke (Cynara scolymus L.) against hydroperoxide-induced oxidative stress in cultured rat hepatocytes. Toxicology and applied pharmacology 144, no. 2 (1997): 279-286.