Edwin Dwight Babbitt was an American physician and early pioneer in the science of chromotherapy (color/light therapy). Modern photobiology has its roots in chromotherapy, and Dr. Babbitt was instrumental in bringing light and color into the scientific verifiable realm.

​Dr. Babbitt was born in Hampden, N.Y. February 1, 1828 to Samuel Tillotson Babbitt, a congregationalist reverend, and Elizabeth (Smith) Babbitt. Little is recorded of his childhood. His family moved to Galesburg, Illinois where his father was in residence as a missionary at Knox College. He later attended and graduated from Knox College with an M.D. degree.

​In 1883, he graduated from the Eclectic Medical College of Cincinnati, Ohio with a degree of LL. D. (Legum Doctor or Doctor of Laws). In that year he also organized the New York College of Magnetics, later named the College of Fine Forces, which offered courses in chromotherapy, magnetic therapy, and psycho-emotional therapy.

​After Augusta’s death, Dr. Babbitt remarried to Elizabeth Smith (North) Clark on January 22, 1879. They had no children together. 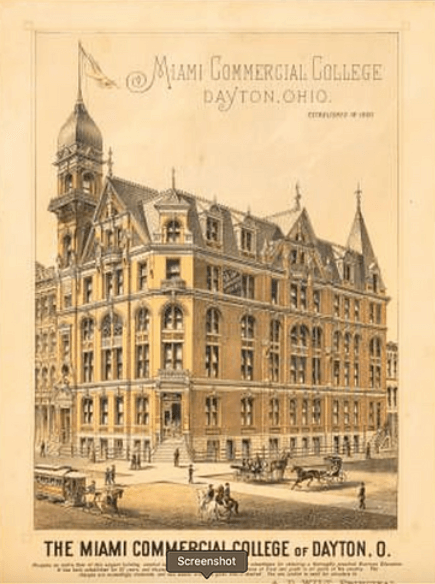 Miami Commercial College, which Dr. Babbitt founded in 1860, is still around today – in 1916 it merged with Jacobs Business College to form what is today known as Miami-Jacobs Career College in Dayton, OH

​Dr. Babbitt certainly was not the first to establish color in diagnosis and treatment. Light has been used therapeutically for thousands of years. In ancient Egypt, we know that sunlight was used for hygienic purposes, and once humans began manufacturing glass, it also became possible to produce colored light using colored glass as filter technology.

​Avicenna (980–1037), seeing color as of vital importance both in diagnosis and in treatment, discussed chromotherapy in The Canon of Medicine. He wrote that “color is an observable symptom of disease” and developed a chart that related color to the temperature and physical condition of the body. His view was that red moved the blood, blue or white cooled it, and yellow reduced muscular pain and inflammation.  (For more information on Avicenna, read our treatment of his life here.)

​During the American Civil War General Augustus Pleasonton (1801–1894) conducted his own experiments in light and color and in 1876 published his book The Influence of The Blue Ray of The Sunlight and Of The Blue Color Of The Sky. This book described how the color blue can improve the growth of crops and livestock and can help heal certain diseases in humans. He grew grapes for wine, using not only transparent colorless glass, but also blue window glass. With the latter, he got a significant increase in plant growth. Later, he performed similar experiments on humans.

​In 1933, Indian-born American-citizen scientist Dinshah P. Ghadiali (1873–1966) published The Spectro Chromemetry Encyclopaedia, a work on color therapy.  Ghadiali claimed to have discovered why and how the different colored rays have various therapeutic effects on organ function.. He believed that colors represent chemical potencies in higher octaves of vibration, and for each organ and system of the body there is a particular color that stimulates and another that inhibits the work of that organ or system.

Ghadiali also thought that, by knowing the action of the different colors upon the different organs and systems of the body, one can apply the correct color that will tend to balance the action of any organ or system that has become abnormal in its function or condition. Dinshah P. Ghadiali’s son, Darius Dinshah, continues to provide information about color therapy via his Dinshah Health Society, a nonprofit organization dedicated to advancing non-pharmaceutical home color therapy, and his book Let There Be Light. 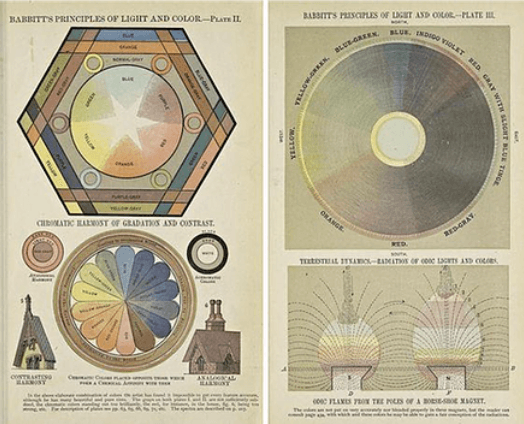 Plates from DR. Babbitt’s The Principles of Light and Color: including among other things the harmonic laws of the universe, the etherio-atomic philosophy of force, chromo chemistry, chromo therapeutics, and the general philosophy of the fine forces, together with numerous discoveries and practical applications (1878). 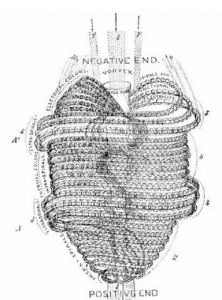 ​In the final decade of his life, Dr. Babbitt together with his wife and children frequently relocated his practices and chromotherapy schools, thus reestablishing himself in cities.

Dr. Edwin Babbitt died June 28, 1905, at the age of 77 years in Rochester, N. Y. He was buried in Dayton, Ohio. He left a legacy of extensive research into color and light’s effect on human physiology. He certainly was one of the great pioneers of photobiology. 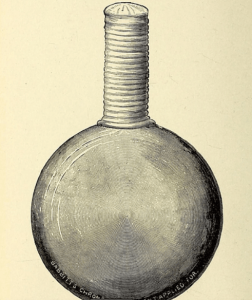 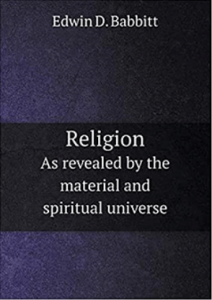 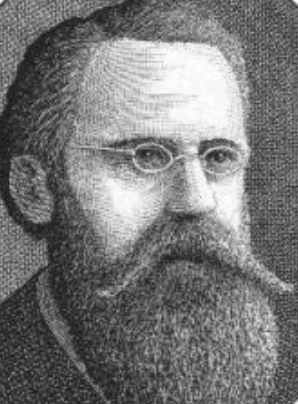 “Light reveals the glories of the external world and yet is the most glorious of them all. It gives beauty, reveals beauty and is itself most beautiful.”

​Dr. Babbitt moved to Dayton, Ohio in the late 1850’s and established the Miami Commercial College in 1860. In 1863 he published The Babbittonian System of Penmanship. During this time, Dr. Babbitt developed his theories of color diagnosis and therapy and the electromagnetic spectrum and magnetism. This area of study (chromotherapy) preoccupied him for the remainder of his life.

​In 1869, he began treating psycho-emotional disorders in Boston and New York using chromotherapy and magnetic therapy. After several years of experimentation with light, color and magnetism in the area of health care, he began publishing articles of his research.

​In 1876, Dr. Babbitt published his classic book on chromotherapy, The Principles of Light and Color. He had two purposes for publishing his book. The first was to convince his fellow medical colleagues that he had discovered a valuable therapeutic system. The second was to present to the world a philosophy of ‘light and color’ that he believed formed and affected fundamental principles of life.

The Principles of Light and Color included Dr. Babbitt’s research into the harmonic laws of the universe, the etherio-atomic philosophy of force, chromo chemistry, chromo therapeutics, and the general philosophy of the fine forces (magnetism), together with numerous discoveries and practical applications. It is illustrated by more than two hundred engravings with four colored plates. 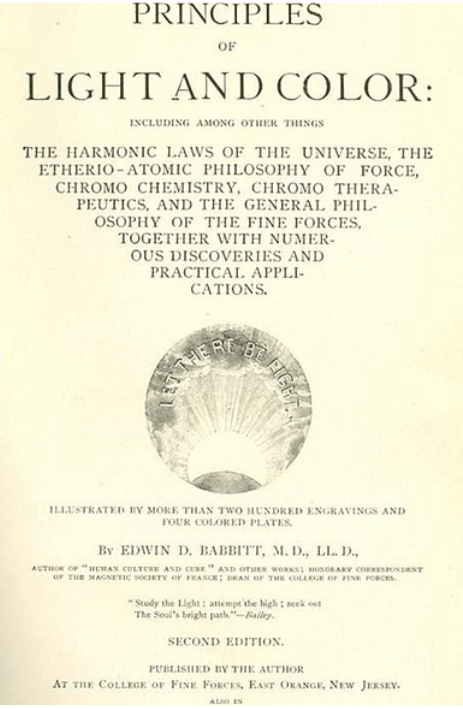 ​On the other hand, humans have not only evolved to adapt to sunlight but also to the influence of fire — near-infrared and mid-infrared radiation that is extremely low in the blue range wavelength, which is also emitted by incandescent light sources. An important point that needs to be understood is that the human retina is not designed to be exposed to blue light at night. As humans evolved, we were only ever exposed to fire light at night.

Therefore, it’s so crucial to block blue light, particularly at night, but also during the daytime when the light is emitted from artificial sources. Incandescent and halogen lights are acceptable as they produce near-infrared wavelengths, however LEDs are best avoided, since they are virtually devoid of these healing near-infrared wavelengths, primarily emitting blue light. 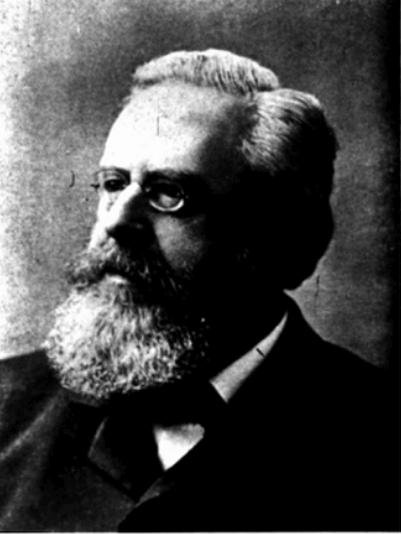 Babbitt, E. D. (1886-10-20), “A Glimpse of Paradise. The Greatest Social Movement of The Ages – The Problem Of Happy Human Lives Solved By The Pacific Colony Co-Operation Planned On A Scientific Basis”, The Spiritual Offering. Newspaper articles relating to the Credit Foncier Company (archive.org) 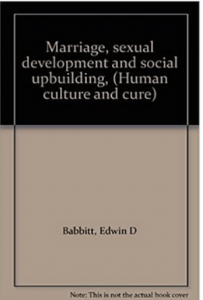