The physician Paracelsus (Philippus Theophrastus Aureolus Bombastus von Hohenheim) was born in Einsiedeln, Switzerland, on November 10, 1493. He is considered by many to be the “father of chemistry.”

His father, Wilhelm Bombast von Hohenheim, was a Swabian doctor and chemist who served as a physician at the Benedictine abbey in Einsiedeln. His mother, a Swiss woman named Elsa Ochsner, was a bondswoman in the abbey, who died when Paracelsus was 9 years old.

After his mother’s death, Paracelsus and his father moved to the mining town of Villach in Carinthia (southern Austria), where his father became the municipal physician and taught chemistry. His father combined his interests in chemistry and medicine with his patients’ experiences in the mines and in the smelting plants and became an expert in occupational medicine. His father taught young Paracelsus medicine, botany and mineralogy,

Paracelsus decided he wanted to be a physician and chemist like his father. In Villach, he also learned about metals, ores, and the chemicals used to process them.

WHAT’S IN A NAME? 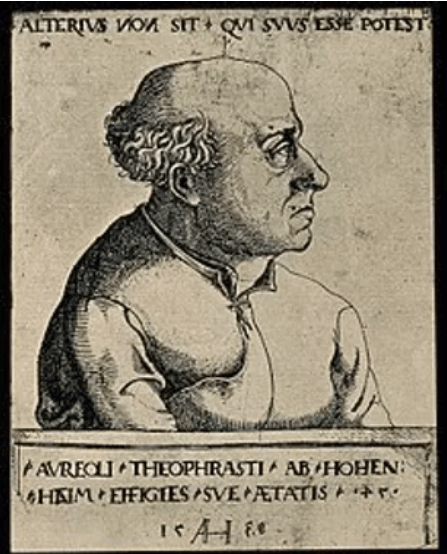 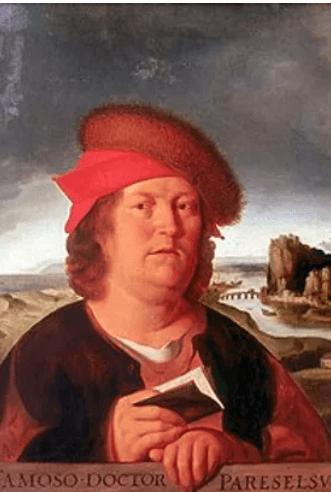 In 1507, Paracelsus left home and traveled throughout Europe – from university to university in search of a famous teacher and an interesting subject to study.

During the next five years, he attended the universities of Basel, Tübingen, Wittenberg, Heidelberg, Leipzig, and Cologne, but was disappointed with each of them.

While he was in Ferrara, his high self-esteem led to his adopting the name Paracelsus, to indicate his authority was equal or superior to that of Celsus. (Aulus Cornelius Celsus, c. 25 BC – c. 50 AD, was a Roman encyclopedist, known for his medical philosophy and work.)
​

During his medical studies, Paracelsus began to question the university’s medical thinking and challenged the medical system in his teaching and writing. He was disenchanted with universities and noted that, “The universities do not teach all things.”

To further broaden his knowledge, and to gain more experience, he traveled throughout Europe, including England, Ireland, and Scotland. He took part in the “Netherlandish wars” as an army surgeon. Later he went to Russia, was held captive by the Tatars, escaped into Lithuania, and went south into Hungary. In 1521, he again served as an army surgeon in Italy.

His wanderings eventually took him to Egypt, Arabia, the Holy Land, and, finally, Constantinople.

While mixing with people from many cultures, he gained considerable knowledge of several cross-cultural, traditional medical systems. Paracelsus wrote, “I have not been ashamed to learn from tramps, butchers and barbers.”

These influences led him to further reject much of university “school medicine.”

“I have not been ashamed to learn from tramps, butchers and barbers.”

Paracelsus returned to Villach in 1524 as the municipal physician and remained there until 1527. During that time, he contemplated many fundamental issues such as the meaning of life and death, health and the causes of disease (internal imbalances or external forces), the place of humans in the world and in the universe, and the relationship between humans (including himself) and God. This led to the development of a “Paracelsian” approach to medicine and a unique philosophy and theology.

He was a free thinker, an iconoclast, and a theosophist. In 1527, he accepted the position of municipal physician in Basel.

This also involved lecturing at the University of Basel, considered then (as now) a privilege. Because of his fame, his lectures were well attended. At the university, and against convention, Paracelsus preferred to lecture and write in German rather than Latin, which was the traditional language of teaching.

Paracelsus believed that medicine should be based on the four pillars of philosophy, astronomy, chemistry, and virtue. He believed that medicine was a divine mission and that physicians should not lose sight of this, and that character was more important than mechanical skill (a philosophy applicable even today). All of this was deemed heresy and not acceptable to the medical community of his time.

His disenchantment with the teaching and practice of medicine of that time reached its climax on June 24, 1527, St. John’s Day, when he publicly burned the books of Avicenna, the Arab “Prince of Physicians,” and those of the Greek physician Galen, in front of the university.

Paracelsus reached the peak of his career at Basel. In his lectures, he stressed the healing power of nature and denounced the use of methods of treating wounds, such as padding with moss or dried dung, that prevented natural draining. The wounds must drain, he insisted, for “if you prevent infection, Nature will heal the wound all by herself.”

He also attacked many other medical malpractices of his time, including the use of worthless pills, salves, infusions, balsams, electuaries, fumigants, and drenches. However, by the spring of 1528, Paracelsus had fallen into disrepute with local doctors, apothecaries, and magistrates and was forced to leave the university and the city of Basel.

The classical theories of Aristotle and Galen formed the basis of medicine at the time. A popular concept carried over was the four humors of Hippocratic medicine – black bile, yellow bile, phlegm, and blood. Each humor corresponded to one of the traditional four temperaments. Paracelsus rejected the four humors of disease and told doctors to study nature and develop personal experience through experiment.

He also rejected the belief that the human body was controlled by the planets and the stars.

Paracelsus ascribed disease to “infectious seeds” (one of the first suggestions that disease was localized) rather than an imbalance in the four humors. He believed that diseases tend to localize in an organ (target organ), a concept developed further as target organ of toxicity. Consequently, he disapproved of bloodletting, which was a popular treatment at the time. and refused to prescribe most of the medicines of local apothecaries.

Paracelsus regarded alchemy, a medieval form of chemistry, as a spiritual science. He was a member of the Hermetic cult and believed in the “three principles” of Arabian alchemists, consisting of mercury (characterized by fluidity, heaviness, and metallicity), sulfur (characterized by the principle of inflammability), and salt (characterized by the principles of solidity and relative chemical inertness). Galenists believed that a disease of certain intensity would be cured by a medicine of opposite intensity (principle of contrariety). Paracelsus and his followers espoused the position that like cures like; that is, “a poison in the body would be cured by a similar poison,” (principle of similitude) but that the dosage is very important.

Although he wrote that “nature hints at cures,” he felt that many herbal preparations lacked sufficient potency to treat current diseases. Paracelsus reintroduced into medicine the use of inorganic salts, metals and minerals. He also introduced tincture of opium-labdanum or laudanum – with which he effected miraculous cures probably learnt during his travels in the East. He established the correlation between cretinism and endemic goiter and described the congenital transmission, and mercurial treatment of syphilis. Paracelsus was the first to connect goiter with minerals, especially lead, in drinking water.

Paracelsus ushered in the era of “New Chemical Medicine.” Paracelsus extended his interest in chemistry and biology to what we now consider toxicology. 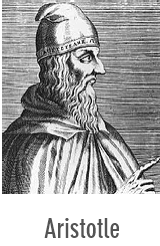 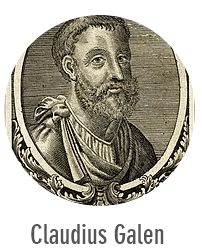 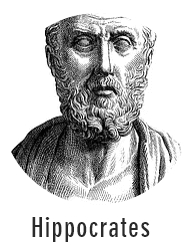 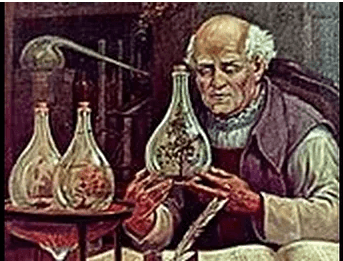 From 1528 to 1538, Paracelsus traveled about and stayed at various places with friends while revising old manuscripts and writing new treatises. During this time Paracelsus is said to have undergone a spiritual conversion. He gave up his material possessions and led a beggar-like existence. He went to cities in Austria and Italy, where the Black Plague was raging, and attended to the sick.

In this new spirit that drove him, Paracelsus gave special attention to the poor and the needy. His work was guided by a more spiritual and mystical view. He felt strongly about relating his philosophy of nature to his religious beliefs.

Paracelsus’ approach was always scientific, but he also stressed the importance of character, including virtue. He lived the life of a virtuous and compassionate man.
​
Paracelsus’ publications include several almanacs and a few medical works, but his most famous text was Grosse Wundartzney or “The Great Surgery Book” (published in 1536), which dealt with medical problems, described syphilis in clear clinical terms, and had several chapters on the treatment of gunshot wounds. He criticized the then-current treatment of syphilis and the use of guaiac in his Vom Holtz Guaiaco gründlicher heylung, published in 1529, and in Von der Französischen kranckheit Drey Bücher (1530).

He published Von der Bergsucht oder Bergkranckheiten, reputed to be the first book on occupational disease (miners’ disease), in 1533 or 1534. He was the first to suggest that silicosis or “miner’s disease” was not caused by the curse of “mountain spirits” for sins committed by the miners, but was the effect of inhaling vapors produced by various metals inside the mines.

In his writing, he clearly expounded the concept of dose response stating Dosis sola facit venenum. “The poison is in the dose.” This was used to defend his use of inorganic substances in medicine, because his critics claimed they were too toxic to be used as therapeutic agents. Paracelsus also wrote books about cosmology (the nature of the universe).

Paracelsus aroused the ire of the medical establishment by denouncing Galen and his works, by advancing chemistry through introducing new chemical agents (inorganic salts, metals, minerals) into medicine, by stressing the dosage of the medicines used, and by trying to reform medical education.

In May 1538, Paracelsus returned to Villach again to see his father, only to find that his father had died four years earlier. In 1540, Paracelsus went to Salzburg, Austria, and died in mysterious circumstances at the White Horse Inn, on September 24, 1541.