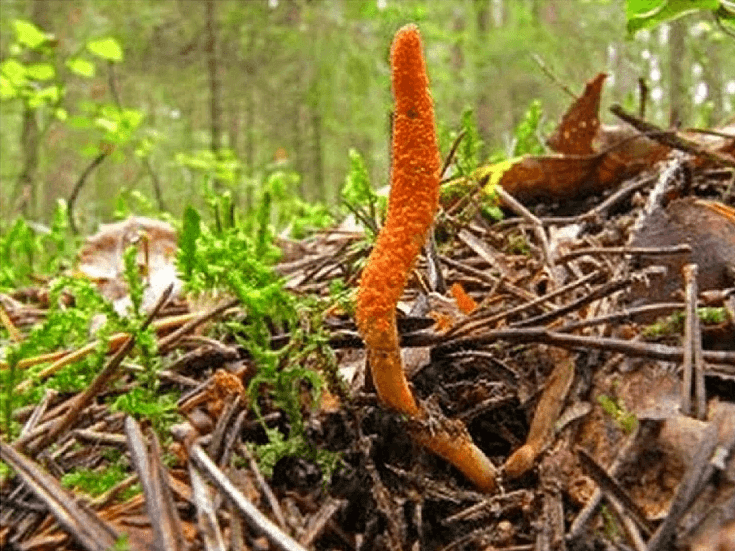 The fungus Cordyceps sinensis has been used for several millennia in Tibetan and traditional Chinese medicine (TCM) to treat numerous illnesses. In TCM, it is commonly used to replenish the kidney and soothe the lung, for the treatment of fatigue, night sweating, hyposexualities, hyperglycemia, hyperlipidemia, asthenia after severe illness, respiratory disease, renal dysfunction and renal failure, arrhythmias and other heart disease, and liver disease.1, 2, 3, 4, 5 Recent studies have demonstrated its multiple pharmacological actions, such as anti-oxidation 6, 7, 8, 9, potentiating the immune system 10, 11 and anti-tumor activities.12, 13, 14

Cordyceps is a genus of ascomycete fungi belonging to the family Ophiocordycipitaceae (formerly Clavicpitaceae), parasitic mainly on insects and other arthropods. There are some other closely related species of cordyceps found, but in historical usage, the term Cordyceps normally refers to the species C. sinensis only, which has been valued for many centuries in Traditional Chinese Medicine. These types of fungi are thus named entomophagous (feeding on insects) fungi. The medicinal preparation from the fruiting bodies of C. sinensis is named dong-chong-xia-cao which translates as winter worm and summer grass. C. sinensis generally infects the larvae of the Hepialidae moths, found only in the highlands of the Himalayan region. The larva hibernates underground through the winter. 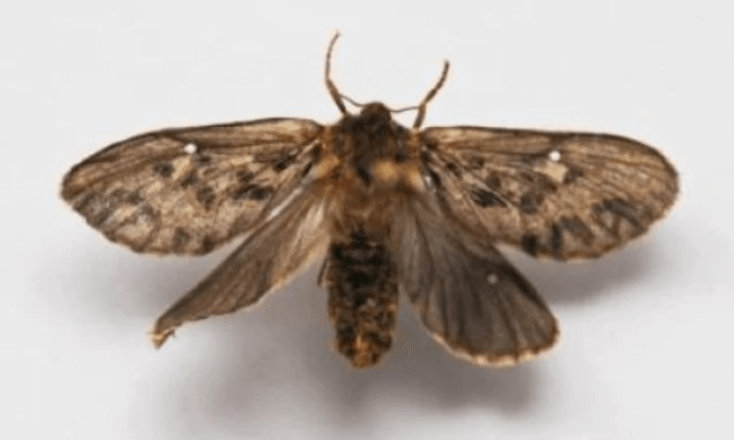 The fungus kills the infected host and grows throughout the cadaver, and in the summer, a rod-like stroma of the fungus grows out from the mummied shell of the dead host. Cordyceps species are generally known as the “caterpillar fungus” due to this characteristic parasitism of the living larvae of insects.

The spores of C. sinensis are spread by the wind over the soil and onto plants, where they come into contact with insect larvae, particularly when the caterpillars emerge to feed on roots and herbaceous vegetation. The caterpillars may eat the spores or the spores lying on their bodies may germinate and enter their bodies through the mouth or respiratory pores. Its mycelium invades the caterpillar’s body, killing the insect, and eventually completely replacing the host tissue. The dead caterpillar appears yellowish to brown in color. 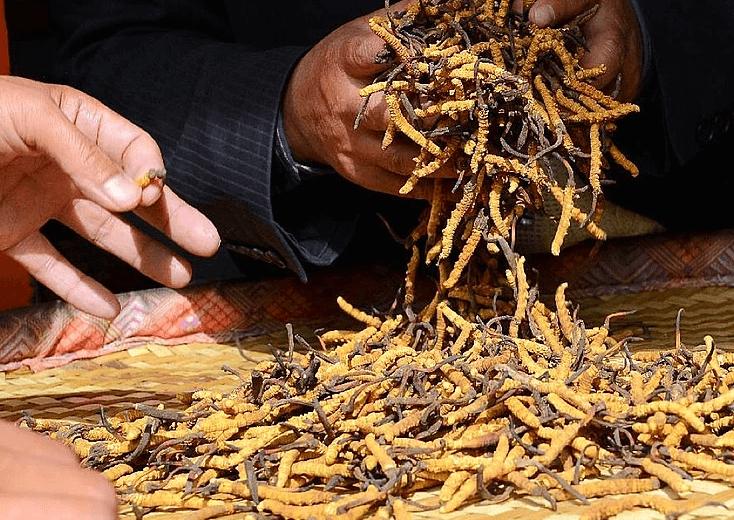 The parasitic complex of the fungus and the caterpillar is found only in the high-altitude soil of the Himalaya (at elevations of 3,500 to 5,000 meters), and is therefore very difficult to collect. Because of such difficulties, it has always been one of the most expensive medicinal fungi known. Tibetan peoples continue to gather increased amounts of C. sinensis, and this harvesting has become one of the most important sources of income in certain parts of the country. 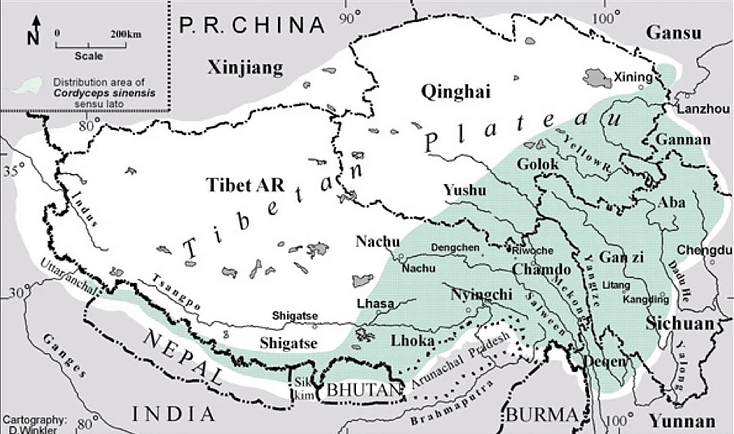 The harvest season starts at the beginning of April and lasts until the end of June. After that period, the body of the caterpillar decomposes and becomes hollow. C. sinensis is renowned within other international markets, and is available in several countries around the globe, where it is sold in different forms. 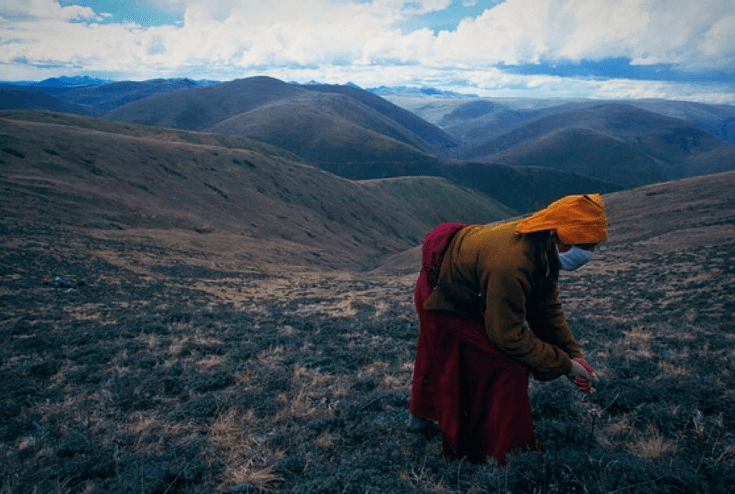 Cordyceps are an excellent source of bioactive metabolites that exhibit many clinically proven benefits for human health. Several bioactive constituents from cordyceps species have been found. It contains polysaccharides, cordycepin, cordycepin acid, vitamins, sterols, nucleosides, macro and microelements, as well as many sugars, including mono, di and oligosaccharides. These chemicals are attributed to the many varied pharmacological activities of cordyceps. Among nucleosides, adenosine and cordycepin are the major biochemical markers. C. sinensis contains a high concentration of adenosine, guanosine and uridine. Adenosine is shown to have beneficial effects on coronary and cerebral circulation15, control of blood flow16, prevention of cardiac arrhythmias17 and nerve-tissue functions such as the inhibition of neurotransmitter release and the modulation of adenylate cyclase activity.18

In cordyceps species, there occurs a wide range of nutritionally important components including various types of essential amino acids, vitamins like B1, B2, B12 and K, different kinds of carbohydrates such as monosaccharides, oligosaccharides and various medicinally important polysaccharides, proteins, sterols, nucleosides, and other trace elements. The fruiting body harbors many abundant amino acids such as lysine, glutamic acid, proline and threonine. The fruiting body is also rich in unsaturated fatty acids (e.g., linoleic acid), which comprises about 70 % of the total fatty acids. 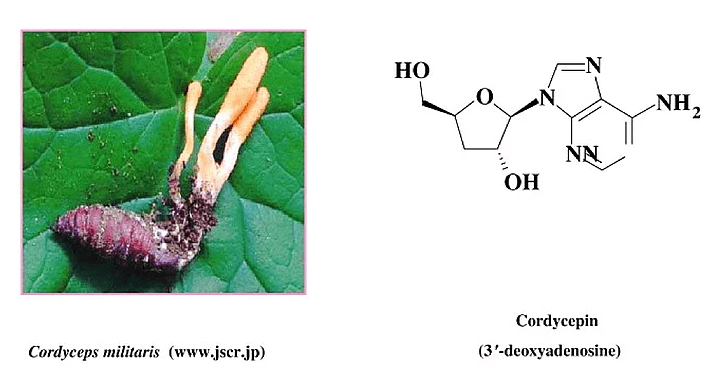 Cordyceps species has a long history of use in TCM as a lung and kidney tonic, and for the treatment of chronic bronchitis, asthma, tuberculosis and other diseases of the respiratory system. The cardiovascular effects of cordyceps are being observed more frequently by researchers, as it works through a variety of possible ways – either by lowering high blood pressure via direct dilatory effects, or mediated through M-cholinergic receptors resulting in improvement in the coronary and cerebral blood circulation. Thus, cordyceps has implications at the therapeutic level as well by rectifying the abnormalities in rhythmic contractions (also known as cardiac arrhythmia).

An antibacterial protein isolated from cultured mycelia of C. sinensis inhibited the growth of gram-positive and gram-negative bacteria but had no significant inhibition activity against fungi and yeast.19

At the cellular level, diverse biological effects of C. sinensis, such as activating macrophages21, modulating apoptosis22, 23, or inhibiting tumor metastasis24, 25, have been described, many of which can be attributed to production of cytokines.

One of the more interesting studies indicates that C. sinensis can minimize damage induced by total-body irradiation by preventing radiation-induced death of bone marrow and intestinal crypt, as well as promoting the proliferation and differentiation of bone marrow stem cells.26 Hence, C. sinensis is a useful radioprotector for individuals undergoing radiotherapy.

In another study, C. sinensis benefited depressed white count after Taxol treatment. Recovery of blood-forming stem cells from cytotoxic chemotherapy requires not only the hematopoietic stem/progenitor cells (HSC/HPC) to be stimulated, but also an appropriate microenvironment in which the cells can develop. C. sinensis shows that it can promote the differentiation of HSCs both directly and indirectly through its action on osteoblast differentiation.27

C. sinensis became popular during the Chinese National Games in 1993, when a group of women athletes broke nine world records – when asked for their secret, they replied they had been taking cordyceps regularly. Recent literature further confirms that cordyceps enhances cellular energy in the form of ATP (adenosine tri-phosphate).28

Nearly 80–85 % of all medicinal mushroom products are extracted from their fruiting bodies, while only 15 % are derived from mycelium culture.29 The fruiting body of cordyceps is a very small, blade-like structure, making its collection difficult and expensive. Since there is a huge demand for medicinal mushroom bio-metabolites, it is necessary to cultivate mycelium biomass artificially, for which a variety of methods have been employed.30, 31, 32 In the 1980’s, when wild C. sinensis was gaining in popularity, and the price tag kept climbing, scientists in China set out to cultivate this fungus. Many tried and many failed. Still to this day, there is no affordable cultivated version of this mushroom. What the scientists did end up with are Cordyceps anamorphs, mycelium cultures that are unable to produce a mushroom (fruiting body).

These anamorphs were grown in liquid fermentation to create mass amounts of pure mycelium. This process is known as liquid culture mycelium and involves growing the mycelium in a liquid solution of nutrients which can then be removed, leaving you with pure mycelium. Cordyceps mycelium can grow on different nutrients containing media, but for commercial fermentation and cultivation, insect larvae (silkworm residue) and various cereal grains have been used. It has been seen consistently that from both insect larvae and cereal grains, fruiting body of fungus can be obtained with almost comparable medicinal properties.33

These anamorphs were studied extensively and found to produce similar results to the wild C. sinensis. This ended up turning into what is now known as Cordyceps Cs-4. After undergoing clinical trials in China, the Chinese government approved its use in TCM hospitals and it is now recognized as a safe natural product drug in China.

If a cordyceps supplement is claiming to be C. sinensis and it is made in China, it is almost certainly Cordyceps Cs-4. Other Cs-4 products may also be labelled as Paecilomyces hepialid, which is an anamorph form of C. sinensis.

When speaking of mushrooms and fungus, many consumers worry about toxicity. However, no human toxicity report was found with cordyceps, and even animal models failed to determine median lethal dose. Cordyceps dosage up to 80 g/kg body weight/day for 7 days was injected intraperitoneally in mice and even then, it did not cause any fatality.34

In another study, rabbits fed orally for 3 months at a dose of 10 g/kg/day did not show any deviancy in blood reports, or in kidney, liver functioning.35 Even water extract of C. sinensis was found to be non-toxic on macrophage cells line RAW264.7 proliferation.36 It is suggested that caution should be taken while taking C. sinensis by patients who are undergoing anti-viral or diabetic drug treatments as cordyceps contains hypoglycemic and anti-viral agents, which can further affect the dosage of these drugs.37

As with all medicinal mushroom supplementation, the dosage of cordyceps depends on the patient’s health, age, and other conditions. Typical doses can range from 3-9 grams daily, but lower doses of 300 mg taken three times a day have also been used in studies. Consult a health care practitioner before deciding on taking this food supplement. In human research trials, dosages in the range of 1,000 – 3,000 mg have been used. This dosage is either taken all at once or split into two administrations with meals. Cordyceps may be standardized to contain 8% cordycepic acid and 0.28% adenosine, both considered important ingredients.

Medicinal mushrooms have gained global scientific attention due to a wide range of pharmacological and nutraceutical properties. C. sinensis has been described as a fungal therapeutic bio-factory due to the presence of medicinal metabolites like cordycepin, cordycepin acid, uridine, adenosine, guanosine, and numerous nutrient elements. Species of cordyceps have been used for thousands of years in prevention and treatment of disease. Numerous cancer-related deaths could be prevented or reduced by supplementing our diet with medicinal mushrooms such as cordyceps, as they are antioxidant, antitumorous, apoptotic, and immunomodulatory.