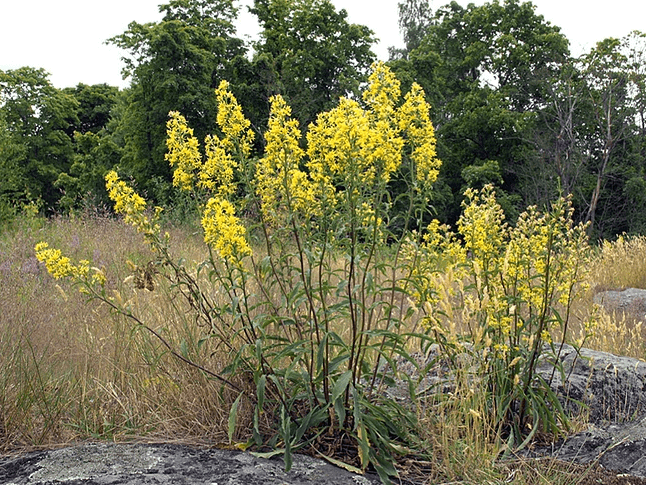 Solidago virgaurea is an herbaceous perennial plant of the family Asteraceae. It is widespread across most of Europe as well as North Africa and northern, central, and southwestern Asia (China, Russia, India, Turkey, Kazakhstan). The genus Solidago is classified into more than 150 species, which crossbreed easily and form new varieties. European goldenrod (Solidago virgaurea) is divided into two subspecies which are both polymorphous. Precise identification is not easy; however, it is easy to differentiate European from Canadian goldenrod, which was introduced to Europe in the last century. The flowering period is from July to September.

The Latin name Solidago is a compound of solidum agere, meaning to make firm, whole, healthy. The name of the species, virga aurea, means golden rod.

In earlier times this plant was primarily used for healing wounds. This is reflected in the German folk name “Heidnisch Wundkraut”, which means “heathen woundwort”. The German name “Unsegenkraut” or “curse herb”, suggests that goldenrod was also used as a defensive remedy against witchcraft and the evil eye. In 1565, Hieronymus Bock wrote that the ancient Germanic tribes considered goldenrod the most valuable of the wound herbs. It was said to heal all “inner deficiency”. Petrus Andreas Matthiolus in the 1500s was the first herbal author to underline its diuretic effect, claiming it was “powerful in increasing the flow of urine and dissolving stones”.

The Europeans also took advantage of its astringent qualities internally and used goldenrod in cases of diarrhea, cough, chronic catarrh of the lungs, spitting of blood from the lungs, and gum ulcerations.

Phytochemical Properties Contained in the Plant

Pharmacological activity of Solidago virgaurea results from the presence of many biologically active compounds, among which flavonoids and phenolic compounds are considered to be most valuable. It contains numerous aponins, diterpenes (solidagolactones, elongatolides), phenolic glycosides, flavonoids (rutin, quercetin, hyperoside, astragalin), tannins, and volatile oils.1, 2, 3, 4, 5, 6, 7, 8

Solidago virgaurea has traditionally been used as an anti-inflammatory herbal medicine for the treatment of urinary tract conditions, nephrolithiasis and prostatic diseases. It has been reported to exhibit antimicrobial, antimycotic, anti-inflammatory, antioxidant, anticarcinogenic, and hypotensive activities.

Unfortunately, European goldenrod has often gotten a bad reputation over the years for being a weed that causes itchy eyes and runny noses. However, the real culprit is its fellow Asteraceae family member ragweed – which are flowering plants in the genus Ambrosia. Solidago virgaurea is actually an anticatarrhal or an ally to battle those same symptoms for which it is being blamed. European goldenrod has a great affinity for the upper respiratory tract as well as the kidneys or urinary tract. Traditionally, Solidago virgaurea has been used to treat itchy, watery burning eyes and sinus congestion associated with allergies. It seems to have a general affinity for the upper respiratory tract where it helps alleviate infections and inflammation that cause sinusitis.

The following are medicinal properties associated with Solidago virgaurea.

In several studies oral administration of an aqueous extract of Solidago virgaurea resulted in an increase in diuresis.9, 10, 11 No isolated compound which has been isolated from Solidago virgaurea is recognized as responsible for its diuretic action, thus the complex mixture of constituents contributed to this effect. Indication of an increase of volume of urine, especially in cases of inflammation and renal calculi/gravel is well documented, both in monographs and textbooks, as in data regarding longstanding use.

In an in vitro study, polyphenolic-polysaccharide conjugates extracted from the flowers of European goldenrod were found to inhibit the peroxynitrite-induced nitration and oxidation of platelet proteins. Ethanolic extracts of European goldenrod (plant parts not specified) were found to have antioxidant activity in vitro, with inhibition of lipoxygenase and xanthine oxidase pathways.12

Both aqueous and ethanolic extracts of Solidago virgaurea leaves or flowers (1 mg/mL) had cytotoxic activity against human prostate cancer PC3 cells in vitro. Mice pre-injected with the rat prostate cancer cells (AT6.1) were given intraperitoneal, or intraperitoneal and subcutaneous, injections of phosphate-buffered saline extracts of European goldenrod 5 mg/kg every 3 days for 25 days. European goldenrod extracts suppressed tumor growth in these mice compared with control mice.17

An open multicenter study in 74 female patients with dysuria found that an extract of European goldenrod administrated three times daily for 14 days, decreased the frequency of urination in 69.2% of patients, as well as other symptoms of cystitis in a greater number of patients.22

In another open multicenter study of 1487 patients, a subgroup of 512 patients with chronic recurrent irritable bladder conditions were given a dry extract of European goldenrod 424.8 mg three times daily; 96% of these patients showed an improvement in the clinical global impression scale.23

The European Medicines Agency assessment report for Solidago virguarea L. Herba describes an open multicenter post-marketing study in 53 patients with symptoms of urinary-tract inflammation. Patients were given an ethanolic extract of European goldenrod 64% (v/v) for up to one year; adults were given 100 drops daily, while children under 1 year of age were given 55 drops daily. Clinical improvement, with a reduction in dysuria, pollakiuria, and tenesmus after taking the European goldenrod extract was seen in 65.4% of patients.24

The same European Medicines Agency assessment report also notes an open post marketing study in 1487 patients with irritable bladder, urinary tract infections or renal calculi. Improvement in the clinical global impression scale was seen in 79% of the patients, when an ethanolic extract of European goldenrod was given for an average of 4 weeks.25

In an open post-marketing crossover study, 22 healthy subjects given 100 drops daily of an ethanolic extract of European goldenrod 64% (v/v) for 2 days showed an increase in daily urine output of 27% compared with those taking placebo.26

The German Commission E (a scientific advisory board that gives scientific expertise for the approval of substances and products previously used in traditional, folk and herbal medicine), approved the internal use of Solidago virgaurea as therapy for inflammatory diseases of the lower urinary tract, urinary calculi and kidney gravel, and as prophylaxis for urinary calculi and kidney gravel.27

The British Herbal Pharmacopoeia reported the internal use of Solidago virgaurea as a diuretic, anticatarrhal, and diaphoretic. The German Standard License for goldenrod herbal tea indicates its use to increase the amount of urine in inflammation of the kidneys and bladder.

European Scientific Cooperative on Phytotherapy (ESCOP) indicates the internal use of Solidago virgaurea for irrigation of the urinary tract, especially in cases of inflammation and renal gravel, and as an adjuvant in the treatment of bacterial infections of the urinary tract. Goldenrod is classed as an aquaretic, increasing renal blood flow and increasing the glomerular filtration rate without stimulating the loss of sodium and chloride. Aquaretics are considered safer than many synthetic diuretics that promote the loss of electrolytes such as potassium.

In traditional phytotherapy, all plants have both a physiological effect and a psychoemotional effect. Historically, in European phytotherapy, Solidago virgaurea has been used to resolve relationship problems and difficulties with intimacy. According to folklore, the nature of Solidago virgaurea is to connect the separated and incomplete parts into a whole. Feeling connected through friendships and intimacy activates biological processes. As previously described, Solidago has a special resonance with the kidney and supports kidney function. When the harmonic flow of the connecting feelings disappears, when disappointments, frustrations and feelings of guilt are blocking relationships, psychological forces are weakened, and the kidneys suffer.

Solidago virgaurea is a very specific and efficacious kidney function plant. It is indicated with renal diseases, which are often emotionally connected with painful experiences in relationships and partnerships that involve separation and loss.

Contraindicated in individuals with known hypersensitivity to goldenrod.

Toxicity: None reported to date. Considered safe for medium- to long-term usage with periodic breaks.

Physiological conditions: It is a mild diuretic, increasing renal blood flow and increasing the glomerular filtration rate without stimulating the loss of sodium and chloride; useful for urinary tract infections and inflammatory diseases of the lower urinary tract; kidney and bladder stones, cystitis, nephritis; and as an aid to toxic element detoxification treatment for increased kidney flow and filtration.

Psychoemotional conditions: It is indicated with renal diseases, which are emotionally connected with painful experiences in relationships and partnerships that involve separation and loss.

All dosages should be individualized depending on the condition treated and the individual’s constitution and tolerance. Best to follow manufacturer’s recommended directions if available.

Generally, as a Tea: Standard infusion of dried leaves and flowers; 1-3 oz up to four times per day.

Chodera, A., K. Dabrowska, A. Sloderbach, L. Skrzypczak, and J. Budzianowski. Effect of flavonoid fractions of Solidago virgaurea L on diuresis and levels of electrolytes. Acta poloniae pharmaceutica 48, no. 5-6 (1991): 35-37.