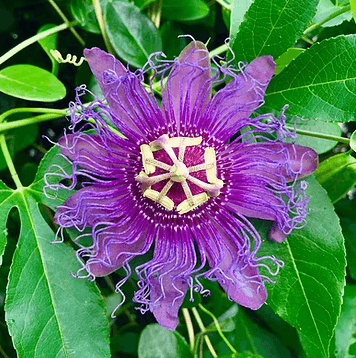 Passionflower (Passifloraceae) is a perennial creeping vine, native to the tropical and semi-tropical Americas from a family with over 500 different species. Common species include P. incarnata, P. edulis, P. alata, P. laurifolia, and P. quadrangularis. Those with edible fruit include P. incarnata, P. edulis, and P. quadrangularis, the latter being one of the major species grown commercially for its fruit. Passionflower was first cultivated by Native Americans for its edible fruit. Spanish conquerors first learned of passionflower from the Aztecs of Mexico, who used it for centuries as a sedative to treat insomnia and nervousness. The plant was taken back to Europe where it became widely cultivated and introduced into European herbal medicine. It is now a plant that grows throughout the world.

Its traditional uses in Native American medicine (by the Cherokees of the southern Allegheny mountains, the Houmas of Louisiana, and the Aztecs of Mexico) are well documented and predate its entry into conventional American and European medicine. It was introduced into North American conventional medicine in the mid-1800s, from Europe, or through native or slave use in the South. Today, passionflower is officially in the national pharmacopeias of Egypt, France, Germany, and Switzerland, and also monographed in the British Herbal Pharmacopoeia and the British Herbal Compendium, the ESCOP monographs, the Commission E, the German Standard Licenses, the German Homeopathic Pharmacopoeia, and the Homeopathic Pharmacopoeia of the United States.

Growing up to a length of ten meters the vine gently attaches to other trees without harming them. The unique, elaborate flowers arise singly from axils, the floral parts purplish blue, pink, and white, fringed. Leaves alternate, deeply 3- or occasionally 5-lobed, on stalks up to 3 inches long. Two small glands are located near the top of the leaf stalk. Fruit fleshy, egg-shaped or nearly spherical, up to 2 inches long, green, becoming yellow at maturity, edible with a sweet pulp like citrus. The unusual construction of its whitish violet flowers caused Spanish missionaries to name this plant with reference to elements of the passion of Christ. Its coronal threads were seen as a symbol for the crown of thorns, the curling tendrils for the cords of the whips, the five stamens for the wounds, the three stigmas for the nails on the cross, the ovary for the hammer, and the five petals and five sepals of the flower for the ten ‘true’ apostles.

The passion flower fruit is prized for its delicious flavor. It is important to consume the fruit when it is ripe (yellow/orange), as it is toxic when it is green. Unripe fruit can contain poisonous cyanogenic glycosides. Ripe fruits are edible raw or made into jellies. However, it is recommended to only eat ripe fruit from commercial sources like shops and markets. 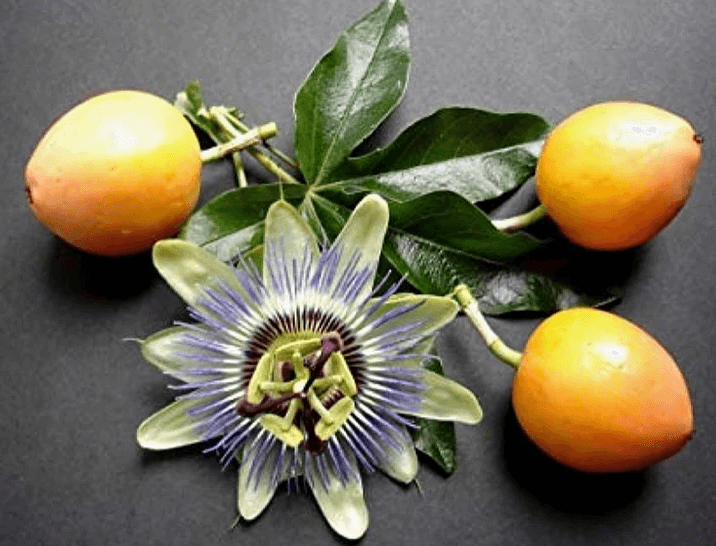 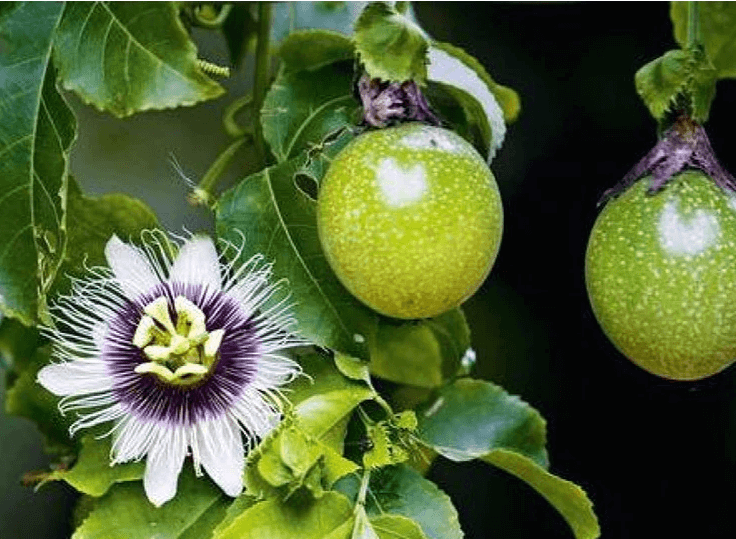 The approved modern therapeutic applications for passionflower are supportable based on its history of use in well-established systems of traditional and conventional medicine, pharmacodynamic studies supporting its empirically acknowledged sedative and anxiolytic effects, and phytochemical investigations. The properties in passionflower are thought to promote calming effects by increasing the levels of the chemical gamma-aminobutyric acid (GABA), which reduces the activity of some neurons that cause anxiety.

The German Commission E approved the internal use of passionflower for nervous restlessness, mild disorders of sleeplessness, and gastrointestinal disorders of nervous origin.

The British Herbal Compendium indicates its use for sleep disorders, restlessness, nervous stress, and anxiety. Other uses include neuralgia and nervous tachycardia. The available pharmacodynamic studies generally support the empirically accepted central nervous system sedative and anxiolytic effects. The specific constituents responsible for these actions remain unclear and it is possibly a synergy of multiple constituents instead.

The German Standard License for passionflower tea indicates its use for nervous restlessness, mild disorders of sleeplessness, and gastrointestinal disorders of nervous origin. It is frequently used in combination with valerian and other sedative plants.

European Scientific Cooperative on Phytotherapy (ESCOP) indicates its use for tenseness, restlessness, and irritability with difficulty in falling asleep. 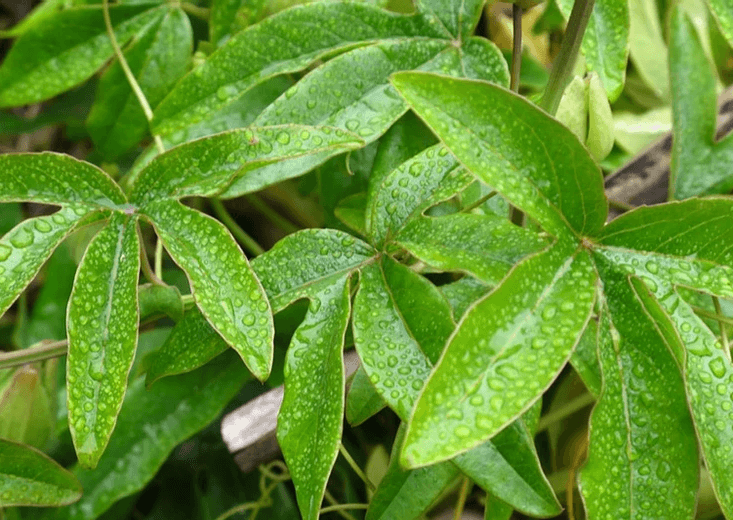 In traditional phytotherapy, all plants have both a physiological effect and psychoemotional effect. Passionflower has a special relationship with the heart and imparts to it an inner peaceful and harmonious tone. The heart is a sensory organ that communicates with the body and brain neurologically, hormonally, and electromagnetically. It is auto-rhythmic and under psychoemotional stress may lose rhythmic order and its ability to sense and communicate with the body.

Passionflower restores rhythm, balance, harmony and communication to the heart. In general, it is the nature of passionflower to impart inner peace and balance.

Passionflower promotes sleep because it allows a deeper state of spiritual confidence within the person. This is especially true with people who understand more about themselves from their dreams. It allows a greater ability to process dreams and eases nightmares.

Flavonoid content (2.5%) includes flavone di-C-glycosides, schaftoside, isoschaftoside, isovitexin, iso-orientin, swertisin, vicenin, lucenin, saponarin, and passiflorine. Free flavonoids include apigenin, luteolin, quercetin, and kamferol. Additionally, coumarins have been identified in the root of the plant, and lycopene is present in large amounts in the aerial parts. Flavonoid determination by high-performance liquid chromatography, mass spectral analysis, and other methods has been extensively reported. It also contains chysin, a natural aromatase inhibitor which blocks the conversion of testosterone to estrogen and thereby conserves testosterone. 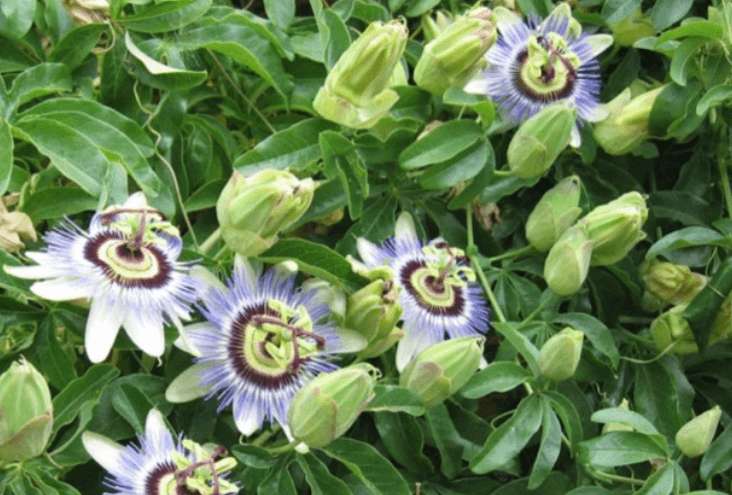 The following are a few pharmacological studies of passionflower that have been undertaken demonstrating its central nervous system sedative properties:

The results suggest that Passiflora extract is an effective drug for the management of generalized anxiety disorder, and the low incidence of impairment of job performance with Passiflora extract compared to oxazepam is an advantage. A large-scale trial is justified.

Elsas, S-M., D. J. Rossi, J. Raber, G. White, C-A. Seeley, W. L. Gregory, C. Mohr, T. Pfankuch, and A. Soumyanath. Passiflora incarnata L. (Passionflower) extracts elicit GABA currents in hippocampal neurons in vitro, and show anxiogenic and anticonvulsant effects in vivo, varying with extraction method. Phytomedicine 17, no. 12 (2010): 940-949.Potential mechanisms of Passiflora incarnata extracts and the effect of extraction methods on ingredients and biological effects were explored. Using the same batch of plant material, total flavonoid yields as measured by high performance liquid chromatography coupled to diode array detection (HPLC-DAD) increased substantially with hot vs. cold extraction methods. Whole Passiflora extract induced prominent, dose-dependent direct GABAA currents in hippocampal slices, but the expected modulation of synaptic GABAA currents was not seen. GABA was found to be a prominent ingredient of Passiflora extract, and GABA currents were absent when amino acids were removed from the extract. Five different extracts, prepared from a single batch of Passiflora incarnata, were administered to CF-1 mice for one week in their drinking water prior to evaluation of their behavioral effects. Anticonvulsant effects against PTZ induced seizures were seen in mice that received two of the five Passiflora extracts. Instead of the anxiolytic effects described by others, anxiogenic effects in the elevated plus maze were seen in mice receiving any of the five Passiflora extracts.

Extracts and fluid extracts from the aerial parts from Passiflora incarnata L. are widely used as components of herbal sedatives. Many pharmacological investigations confirm the sedative effects of Passiflorae herba. From some of the studies also anxiolytic effects can be deduced. As Passionflower is mainly used in combinations, clinical studies of the single drug are not available. Based on pharmacological data, the experiences of traditional use and the use in combinations Passiflora extracts are an important factor in the phytotherapy of tenseness, restlessness and irritability with difficulty in falling asleep.

In outpatient surgery, administration of oral Passiflora incarnata as a premedication reduces anxiety without inducing sedation.

These initial findings suggest that the consumption of a low dose of Passiflora incarnata, in the form of tea, yields short‐term subjective sleep benefits for healthy adults with mild fluctuations in sleep quality.

The results of present study concluded that the hydroethanolic extract of Passiflora incarnata suppress PTZ-induced seizures, and ameliorates its associated post-ictal depression, which has been found to be get worsened with the standard antiepileptic drug, diazepam. 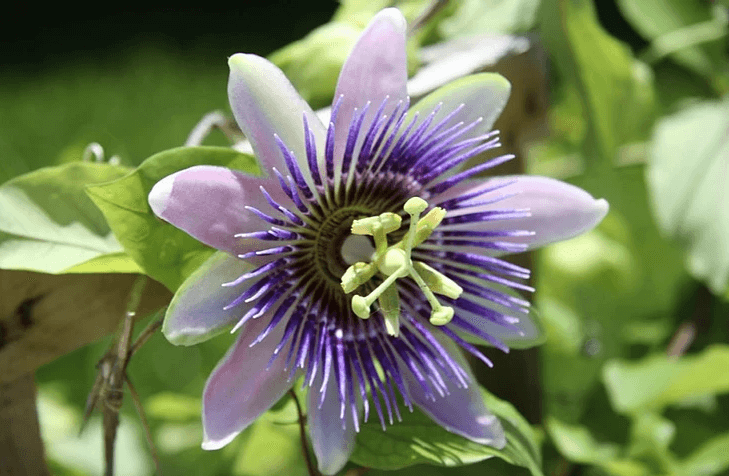 Orally, there are many ways to use passionflower: it is available in capsule and tablet form, as a liquid extract and tincture, and as homeopathic preparations. An infusion or tea is prepared by steeping 1 tsp. dried herb in a cup of boiling water for 10 minutes and then straining.

Passionflower is on the FDA’s GRAS (Generally Recognized as Safe) list and P. incarnata is considered safe for long-term use. However, several species of Passiflora have cyanogenic constituents. Passionflower is not considered safe for pregnant women as it may cause uterine contractions, which could prove to be dangerous. Since there is not enough information about the possible effects of this during breastfeeding, it is also best to avoid it at that stage.

German pharmacopeia grade passionflower must be composed of the whole or cut dried aerial parts, collected during the flowering and fruiting period, containing not less than 0.4% flavonoids calculated as hyperoside. Botanical identity must be confirmed by thin-layer chromatography (TLC) as well as by macroscopic and microscopic examinations and organoleptic evaluation. Purity tests are required for the absence of pith-containing stem fragments greater than 3 mm in diameter and also for the absence of other species. The British Herbal Pharmacopoeia requires not less than 15% water-soluble extractive, among other quantitative standards. The French Pharmacopoeia requires not less than 0.8% total flavonoids calculated as vitexin by measuring the absorbance after reaction.