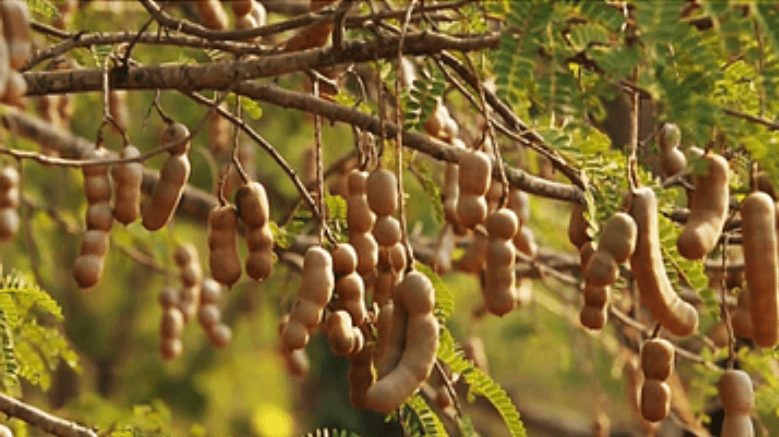 Tamarind ((Tamarindus indica L.) is a multifunctional drought-tolerant fruit tree that has traditionally provided food, medicine, and other products. It belongs to the family Leguminosae or Caesalpiniaceae and is found throughout the tropics and subtropics of the world. The tree has become naturalized at many places particularly in India, South East Asia, tropical America, the Pacific Islands, and the Caribbean. The word “Tamarind” derives from the Arabic word “tamar hindī“, which literally means “Indian date”.

Tamarind is economically valuable and multi-purpose insofar as almost every part of the tree has a use, but the tree is best known for its fruit and the marketability of tamarind fruit has increased consistently over the years. The tamarind tree produces brown, pod-like fruits that contain a sweet, tangy pulp, which is used in cuisines around the world. The major production areas are Asian countries including India and Thailand, with India as the world’s largest producer of the tamarind fruit. The tamarind tree is utilized for many purposes: nutritional, medicinal, ethnoveterinary, and other.1 The differentiation among uses is based on variations in preparation (e.g., cold extraction, boiling, fermentation), application (e.g., external, internal), and product form (liquid, paste, powder).2, 3, 4 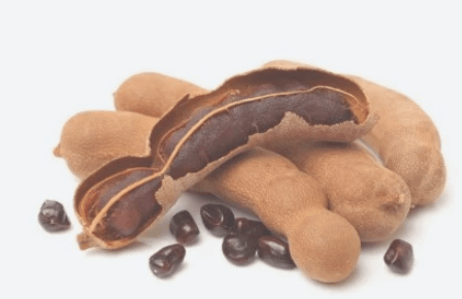 A typical fruit/pod contains about 55% pulp, 34% seeds, and 11% shell and fibers. The anthocyanin pigment chrysanthemin is responsible for the color of the pulp in case of the red variety of tamarind, and the brown color of the pulp of the brown variety is due to leucocyanidin. The percentage of the constituents varies from pod to pod with tartaric acid ranging from 8-18%, reducing sugars 25-45%, pectin 2-3.5%, and protein 2-3%. Besides being a rich source of sugars, tamarind pulp is an excellent source of B-vitamins (B1, B2, B3, B5, B6) and exhibits high antioxidant capacity that appears to be associated with a high phenolic and vitamin C content. The fruit pulp is also a good source of minerals especially potassium, calcium, phosphorus, iron, zinc, magnesium, and trace amounts of selenium and copper. Essentially, the proximate composition of the tamarind pulp depends on locality. The major volatile constituents of tamarind pulp include furan derivatives (44.4%) and carboxylic acids (38.2%), the components of which are furfural (38.2%), palmitic acid (14.8%), oleic acid (8.1%) and phenylacetaldehyde (7.5%).5, 6, 7

The pods are allowed to ripen on the tree until the outer shell is dry and can be easily separated from the pulp without adherence. The pods are then harvested by merely shaking branches of the tree. Tamarind pods contain 3 to12 seeds, which are irregularly shaped, flattened, or rhomboid. Seeds are extremely hard, shiny, reddish, or purplish brown, enveloped by a tough leathery membrane, the so-called endocarp. Outside the endocarp is the light brownish-red, sweetish, acidic edible pulp traversed by tough ligneous fibers.

Fresh-cut processing is not an industrial practice: it is usually carried out on a smaller scale when the fruits are intended to be eaten immediately. Fresh-cut tamarind is processed to make tamarind balls mixed with sugar after removing the shells, seeds, and fibers. On a large scale in processing factories, tamarind pulp is separated from the fiber and seed, then mashed with salt before being packed into bags and if tamarind is intended to be stored for a long period, drying, or freezing is required. 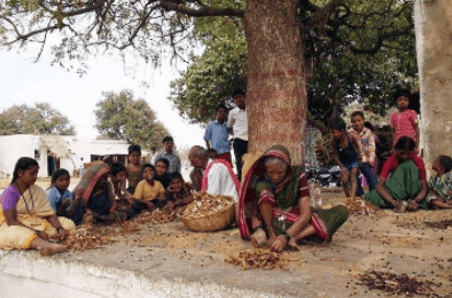 Cracking the pods and removing the seeds

During pre-processing, fresh tamarind fruit is subjected to sun-drying or small-scale dehydrators are sometimes used. The dry fruit is cracked, the pulp and fibers are separated, and the seeds are removed. Pods can be stored for several weeks at 20°C. Also, pulps can be stored for 4-6 months at 10°C by packing in high-density polythene. Mixing with salt can extend the storage period to one year. Tamarind juice is usually prepared by boiling tamarind pulp in water and filtering the juice to remove the pulp before pouring into bottles and sealing. Tamarind concentrate is easily dispersible in water and can be used for many purposes, such as in ketchup, sauces, soft drinks, dairy products, and as a souring agent. It is prepared by soaking the tamarind pulp in water and boiling, separating fine and pulpy matter using a filter, then pressing the residue and mixing this with the extract. The filtered extract is concentrated by evaporating it in a vacuum, filling containers, cooling, and sealing, and storing in airtight plastic or glass bottles or cans, in the dark, for over a year. Tamarind is often further processed into drinks and sweets or packaged into more convenient forms for export. In some parts of India, it is made into a jelly by mixing with water and sieving. It is then compressed into block shaped molds and can be cut like cheese when required.8

As a Food Seasoning

Due to its pleasant taste and rich aroma, the pulp is widely used for seasoning, to flavor confections, curries, and sauces and is used as a substitute for chemical acidulants in the preparation of certain beverages. Tamarind pulp can be processed into a number of products including tamarind juice, concentrate, powder, pickles, and paste.9 Tamarind paste has many culinary uses including a flavoring for chutneys, curries, and the traditional ‘sharbat’ syrup drink.

Most culinary enthusiasts believe it is best to make your own tamarind paste from tamarind pulp.

Tamarind pulp is that dark brown brick labeled simply as “Tamarind.” You can find them at many Asian grocery stores. Homemade tamarind paste from the pulp is more flavorful and sour, and sour is exactly what you want cooking tamarind to be. 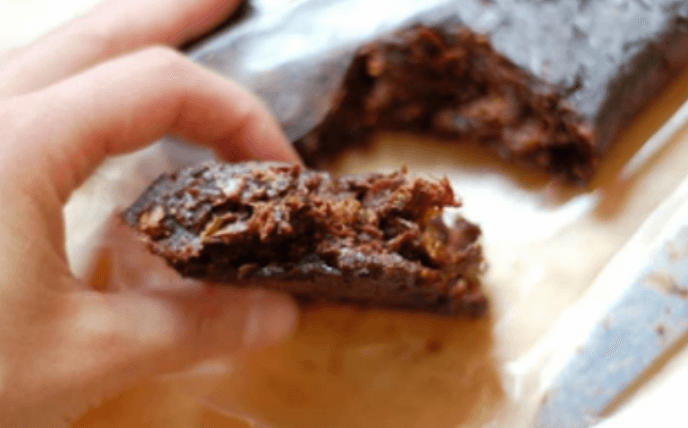 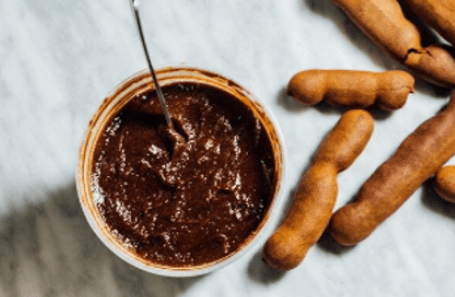 Tear the tamarind pulp into small chunks and place into a large mixing bowl. Heat 2 cups of pure (spring or filtered) water until hot; it can be boiled, but if it is steaming it is hot enough. Pour the hot water over the tamarind pulp and let it sit until cool enough to handle at least 30 minutes. This step can be done many hours in advance.

Once the water is cool enough to handle, massage the pulp with your hand (wear a glove if you wish) until all the pulp is released from the fibers and dissolved into the water. Feel the fibers with your hands and there should not be any soft pulp left on it; it should just feel like fibers.

Once done, strain the tamarind through a sieve into a non-reactive pot, pushing the liquid through with your hands. Once all the liquid has passed through, use no more than 1/2 cup of water to “rinse” the remaining fibers so you can extract any tamarind that is caught up in there. Bring the tamarind paste to a boil over medium-high heat, stirring constantly.

Once boiled, pour the tamarind into clean glass jars, and close the lid while still hot. Let cool to room temperature then store in the fridge. These will last at least 6 months in the fridge, and probably even longer.

The medical use of the tamarind tree has a long historic record and different parts of the tree are recognized for their various medicinal properties. The pulp has been traditionally regarded as a digestive, carminative, laxative, expectorant, and blood tonic.10 The main uses of the fruit in West Africa are as a laxative and febrifuge, whereas bark and leaves are used for wound healing. Diarrhea is treated in East Africa with tamarind leaves but in West Africa with its bark.11

Specifically, the presence of lupanone and lupeol, catechin, epicatechin, quercetin, and isorhamnetin in the leaf extract may contribute towards the diverse range of its medicinal properties.13 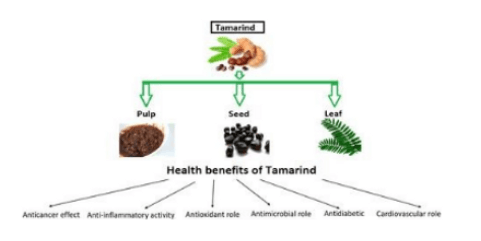 One of the more recent discoveries is tamarind’s ability to facilitate the elimination of fluoride from the body. Both the leaves and fruit pulp have been shown to be effective for fluoride detoxification. Millions of people have been exposed to toxic amounts of fluoride, from municipal water, toothpaste, and other foods and drinks processed with fluoridated water. Fluoride is accumulative and prolonged excessive fluoride exposure plays an important role in the development of dental, skeletal, and non-skeletal fluorosis in both humans and domestic animals. Fluoride ions disrupt the collagen synthesis in the cells responsible for laying down collagen. This disruption leads to these cells trying to compensate for their inability to put out intact collagen by producing larger quantities of imperfect collagen and/or non-collagenous protein. Earlier experiments have revealed that fluoride exposure inhibits the synthesis of collagen and leads to the breakdown of collagen in bone, tendon, muscle, skin, cartilage, lung, kidney, and trachea.

In a human study published in the European Journal of Clinical Nutrition, researchers recruited 20 healthy boys to consume 10 grams of tamarind with their daily lunch for 18 days. The team then analyzed periodic urine samples from the boys to observe the effects. They found that, when tamarind was included in the diet, the boys excreted less zinc and magnesium than when they ate a control diet and excreted far more fluoride. The researchers concluded, “There was a significant increase in 24 hr urinary excretion of fluoride during the period of tamarind ingestion. Excretion of zinc and magnesium decreased significantly during tamarind intake.” 14

Additionally, there have been several animal studies validating tamarind’s effect on the excretion of fluoride.15, 16, 17, 18 In each of these studies the data reveals tamarind has beneficial effects in alleviating fluoride toxicity and hence can serve as a promising detoxification agent.

In 2013 study researchers found that tamarind may remove fluoride from water very effectively. This is promising because it is a natural, inexpensive, and eco-friendly product that can make fluoride tainted water safe.19

Mechanisms of Tamarind on Fluoride Detoxification

The renal clearance of fluoride influenced by the urinary pH and the rate of clearance is higher with alkaline urine. Tartaric acid, a major component of tamarind paste, does not get metabolized and this leads to the production of alkaline urine which promotes urinary fluoride excretion.20 Researchers also have shown that increased excretion of fluoride through urine and feces is acting at both the digestive and metabolic levels. Copper is reported to prevent fluoride accumulation in bone and a high concentration of copper has been found in tamarind. Thus, copper may also have contributed towards the reduced bone fluoride deposition in the test animals receiving tamarind. Additionally, iron and zinc form insoluble complexes with fluoride ions at the gut level and interrupt its absorption. The presence of these trace elements in tamarind might make an additional contribution to the reduction of fluoride body burden.21

Tamarind paste as an anti-inflammatory, antioxidant, and detoxicating agent for fluoride may be dosed at 5 to 10 grams daily or about 1 to 2 tablespoons daily.

The information in this monograph is intended for informational purposes only and is meant to help users better understand health concerns. Information is based on review of scientific research data, historical practice patterns, and clinical experience. This information should not be interpreted as specific medical advice. Users should consult with a qualified healthcare provider for specific questions regarding therapies, diagnosis and/or health conditions, prior to making therapeutic decisions.