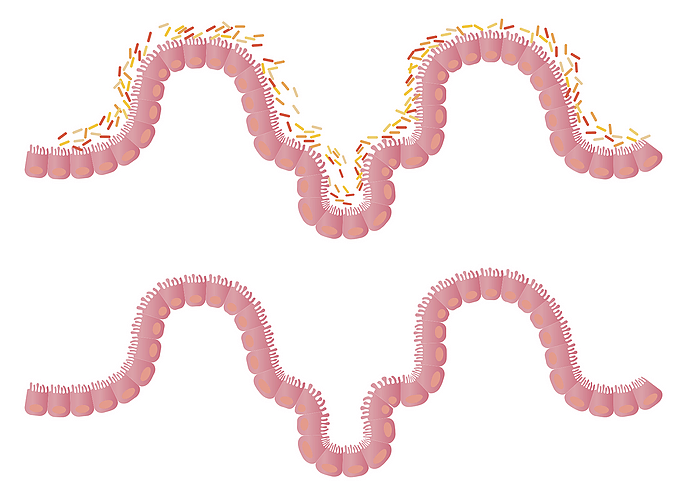 The healthy human body is swarming with microorganisms. These tiny organisms, which can only be seen with the aid of a microscope, make up our microbiota. Microbiota is the newer and correct word for what was formerly referred to as microflora. Microflora indicates that the microorganisms in question would be of the plant kingdom, which, of course, is incorrect. The combination of microbiota, the products it makes, and the environment in which it lives, is called the microbiome. Microbiomes are the communities of microorganisms that live on or in people, plants, soil, oceans, and the atmosphere. Microbiomes maintain healthy function of these diverse ecosystems, influencing human health, climate change, food security, and other factors. Dysfunctional microbiomes in humans, however, are associated with numerous chronic diseases.

The microbiota inhabits every nook and cranny on the surfaces of our body. The largest number of microbiota live in the colon, but billions also live in the mouth, nasal cavity, esophagus, stomach, our intestines, in the pockets of our pleural cavity, inside the urinary tract, vagina, around the rectum, on the skin, under the toenails, and many other places. By far the largest collection of microorganisms reside in our gastrointestinal tract.

More than 1,000 different known bacterial species can be found in human gastrointestinal microbiota, but only 150 to 200 predominate in any given subject. Intestinal microbiota, in total, can weigh up to 2 kg! In a healthy person, there are more than 100-300 trillion bacteria and yeast, compared to only 10 trillion cells in our body. Some types will be in abundance, while other types will be rare. The exact composition of each person’s microbiota is as unique as their fingerprints. But unlike fingerprints, the microbiota is constantly changing. This community of organisms is commonly referred to as our hidden metabolic “organ” due to their immense impact on human wellbeing, including host metabolism, physiology, nutrition and immune function. Indeed, our microbiota is so important, and has such specific functions, that it’s reasonable to view it as another organ of our body.

Microbes start to colonize or occupy our body at birth. The mode of birth, either natural or by caesarean, and breast feeding determines the sort and number of microbes a baby first contacts. When a baby experiences a vaginal birth, the baby gets its first “dose” of microbiota. In fact, 60% of vaginal births will give infants their first microbiota inoculation of Bifidus Infantis. By comparison, it is estimated that only 1% of caesarean section births will give infants B. Infantis inoculation. After getting a dose of microbiota from vaginal birth, consumption of breast milk gives more; in fact, mother’s colostrum is rich in microbiota. This can have a profound effect on the early development of the microbial populations that contribute to the microbiota. The structure, type, and number of microbiota undergo significant changes from its establishment at birth until it matures in early adolescence.

The changing composition of the microbiota is linked with changes in human behavior and the rising prevalence of immunoallergic and metabolic disorders. Major shifts in composition can occur when we radically change our diet or take certain medications like antibiotics, which are, of course, designed to kill bacteria. In particular, broad spectrum antibiotics can inflict significant damage. It is also found that, like our own body, the composition of our microbiota changes in old age, including a loss of diversity. Ultimately, our gastrointestinal microbiota evolves with us and plays a pivotal role in human health and disease.

Our microbiota provides digestive enzymes to allow us to use food that otherwise we could not digest. It provides essential vitamins we cannot make ourselves. It has been proven that the gastrointestinal microbiota produces vitamins, such as: A, K, vitamins B1-B3, B5-B7, B9, B12, and certain important fatty acids. The microbiota interacts with our hormonal and neural systems to help shape our physiology. It is now apparent that our gut microbiome coevolves with us and that changes to this population can have major consequences, both beneficial and harmful, for human health. It has been suggested that disruption of the gut microbiota (or dysbiosis) can be significant with respect to pathological intestinal conditions such as obesity and malnutrition, systematic diseases such as diabetes and chronic inflammatory diseases such as rheumatoid arthritis, inflammatory bowel disease, encompassing ulcerative colitis and Crohn’s disease.

Perhaps most important of all, a healthy gastrointestinal microbiota helps to develop our immune system to fight off pathogenic organisms. The body must be able to distinguish between the beneficial members of the healthy microbiota and invading pathogenic microorganisms that can cause disease. The immune system must learn to live with and nurture the microbiota while fighting off pathogens. Disruption of the correct interaction between microbiota and the immune system may be one of the causes of the massive increase over the past few decades in immune-related diseases. As the volume of data relating to the composition and functional potential of the gut microbiota increases, the number of diseases that have been linked with alterations in our microbial community has also expanded.

Prebiotics and probiotics are becoming increasingly popular. Prebiotics are nutritional compounds used to promote the growth of microbiota and thus have the potential to improve health. Use of oral probiotic cultures to restore intestinal microbiota has led to promising results in the treatment of numerous intestinal disorders as well as systemic diseases. Aside from numerous probiotic cultures in the marketplace, there are many traditional probiotic foods that are extremely tasty and healthful. These foods have been restoring the microbiota for millennia. Foods like natto, miso, kimchi, tempeh, sauerkraut, kefir, kombucha and lassi, all have very rich cultural heritages and medicinal benefits. Probiotics are now being tailor-made that are designed to treat specific illnesses, immune dysfunctions, and organs.