Reinhold Voll was born in Berlin, Germany, on February 17, 1909. Though little has been recorded of his early life, his father was an architect, and Reinhold decided to follow in his father’s footsteps. During his studies, however, his father became ill, and Reinhold decided to change his focus to medicine so that he could aid in his father’s treatment. In 1935, he interned at the Institute of Sports Medicine in Hamburg and graduated in medicine from the University of Tübingen, one of Germany’s oldest and most famous universities. 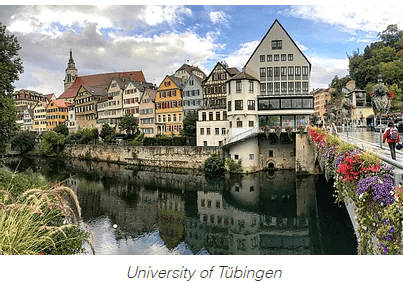 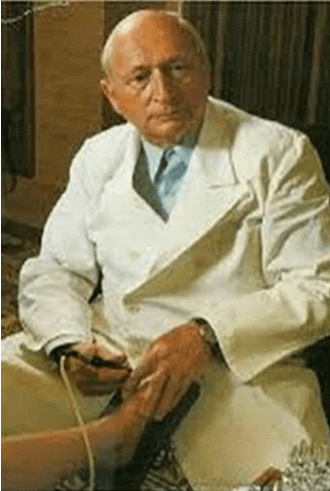 From 1938 to 1943, Dr. Voll focused on preventive medicine, tropical diseases and sports medicine. He also researched homeopathy, traditional Asian iris diagnosis and cell therapy. Dr. Voll was introduced to methods of Chinese acupuncture and traditional Chinese Medicine (TCM) by a doctor who worked in the tropics. He soon become fully adept in the ancient Chinese practice of acupuncture. He had an idea that modern technology might enhance and innovate acupuncture in the treatment of various chronic diseases.

Around 1943, Dr. Voll moved to Plochingen where he worked as a family doctor. During the 1940s, he began experimenting with the effects of electricity on the human body. He began using electric currents to enhance the effects of traditional acupuncture.

Dr. Voll, together with mechanical engineer Fritz Werner, constructed equipment, somewhat like the radio transistors of the time, that allowed him to measure and record the electric conductive potentials of acupuncture points located in the skin. He called this device “Diatherapunktteur.” This led him to develop a technique known as Electrical Conductivity Metering (ECM). This diagnostic technique was based on TCM acupuncture meridians and acupuncture points which became known as Electro-Acupuncture According to Voll (EAV). 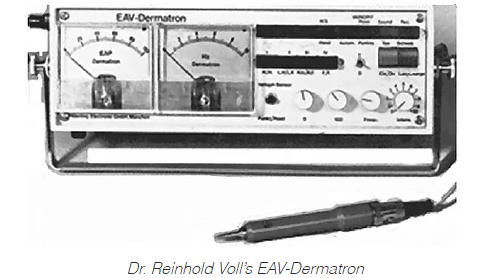 Dr. Voll then began a lifelong search to identify correlations between disease states and changes in the electrical resistance of the various acupuncture points. He thought that if he could identify electrical changes in certain acupuncture points associated with certain diseases, then he might be able to identify those diseases more easily, or earlier, when treatment intervention was likely to be more effective.

Voll and his colleagues then inserted a metal plate into the circuit and demonstrated that many substances that prelude changes in acupuncture point readings when ingested could produce the same changes when placed on the plate (even in closed glass bottles). They assumed that there must be electro-magnetic energy being emitted from the substances, and that these energy fields somehow traveled along the electric circuit to the body.

Dr. Voll focused on certain criteria by which to treat these points. He determined that conditions were either “inflammatory”, “chronic”, or “sub-chronic”. Using homeopathy, he was able to test if substances or remedies were in resonance with the patient before the patient ingested them. Many of the remedies he tested were nosodes that he used diagnostically.

Nosodes are made from disease products. They are sterilized, tested for pyrogen-free, and potentized according to homeopathic laws. They have been known for over 150 years and have been used as a cure especially in England and France. In Germany, they have been used by doctors and therapists since the 19th century, and by EAV therapists for about 30 years and with great success. 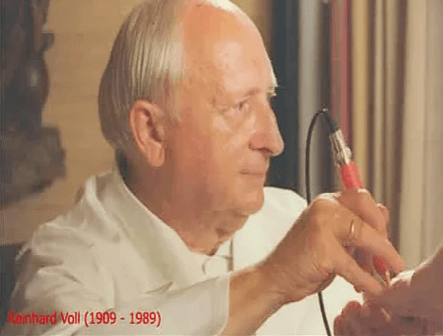 The bioelectrical impedance of acupoints seems to vary between healthy and diseased states.

Electroacupuncture According to Voll is a methodology that uses a calibrated ohmmeter to measure bioelectric impedance on certain acupuncture points located on the hands and feet in response to changes in the physiological functions of organs and structures of the body. This process also evaluates bioelectric impedance of acupuncture points when substances, such as medicines, herbs, supplements, and homeopathic remedies and nosodes are placed in the same electrical circuit with the patient.

In short, Dr. Voll discovered that acupuncture points have distinct electrical properties when compared to surrounding tissue. He initially identified 850 points on the hands and feet that corresponded to organs, glands and tissues.

In the 1960s, the German physician Helmut Schimmel simplified the EAV procedure by reducing the number of measurement points from the original 850 to 60.

The FDA generally classifies EDS machines as Class III devices requiring approval prior to marketing in the US.

EAV utilizes an electronic ohmmeter designed to measure the skin’s electrical resistance at specific acupoints. An EAV device consists of a 12-microampere meter, calibrated from 0 to 100, with an electromotive force of 1.2 V. The instrument has a high internal resistance because the electrical impedance of acupuncture points is lower, and the conductivity is higher than in the contiguous skin.

To take a measurement with this device, a patient holds the negative electrode in one hand and a physician presses the probe (the positive electrode) onto specific acupoints mainly located on the hands and feet. The pressure applied to the skin on the acupoint must be constant. Voll called this “electroacupuncture pressure”. It causes a stable electrical resistance for the overall reading.

There are three basic levels of conductance at the topical points by a properly calibrated instrument:

2. Hypertonia: These points exhibit conductance above 70 (to 100) on the meter scale.

3. Hypotonia: These points exhibit conductance below 40 (to zero) on the meter scale.

Theoretically, with high readings, the bioelectric resistance is low due to increased blood flow, which may be a sign of inflammatory or allergic processes. However, when the initial reading, whatever it might be, decreases and settles at a lower value on the scale, it is called an “indicator drop”, which suggests that the organ or system associated with that acupoint is energetically unhealthy.
​
An indicator “drop” or “deflection” occurs in theory because the organs or systems being measured cannot generate a bioelectric reaction to the initial electric measurement current transmitted by the probe to the acupoint.

Although the indicator drop is the most significant sign in EAV, high readings over 65 should be further evaluated in terms of treatment strategies to pursue when dealing with either inflammation or allergies in the clinical setting. 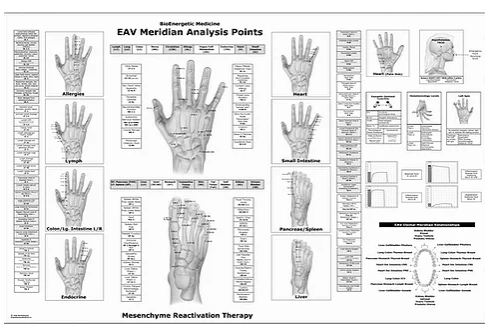 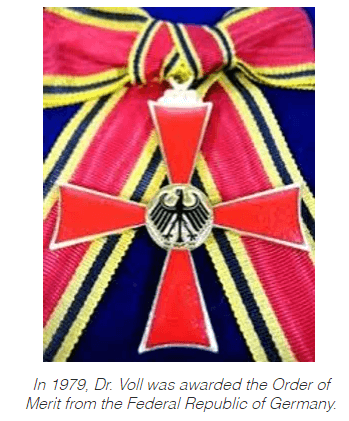 When organs have functional disturbances, the bioelectric resistance of the organ to the measurement current decreases. This is because the organ is unable to maintain a fixed resistance with respect to the incoming current. This decrease in bioelectric resistance is shown by the indicator deflection prior to the establishment of the equilibrium state between the stimulation by the measurement current and the reaction capacity of the organ.
​
EAV does not “diagnose” – i.e., “determine the identity of a disease, illness, etc”. For example, an indicator drop on the measurement point “descending colon” could mean anything from a bleeding polyp, to irritable bowel, to threadworm parasitosis, to chronic constipation. The diagnosis is made by the doctor and confirmed with signs, symptoms, laboratory and other functional and structural testing. Hence, EAV is a screening assessment.
​
A rule or principle for evaluating measurements in EAV is to always take reference to the presenting history, signs and symptoms. As a general rule, the larger the indicator drop, the more serious the condition. Slight indicator drops of the needle, say, 5 or 10 points from maximum value, usually mean some incipient problem, but do not objectify the chief complaint as a rule. Dramatic drops of the needle, 20 points or more, are remarkable and lead to the summating criteria, i.e. the clinical impression.
​
With his EAV system in place and capable of measuring acupoints in a reproducible fashion, Voll created his “medicine testing”. He observed that indicator drops could be corrected, or “balanced”, when the right test substance was introduced into the circuitry by being either placed on the plate or held by the patient.

In 1956, Dr. Voll established the International Medical Society for Electroacupuncture According to Voll (Internationale Medizinische Gesellschaft für Elektroakupunktur nach Voll). This Society acts within the European Association of Medical Associations of Specialized Therapies (ECPM) for the preservation of plurality in the field of medicine.

Some EAV companies exist outside of Germany in Italy, Austria, Spain and the Czech Republic. Medical working groups on EAV collaborate loosely with one another worldwide.

​Dr. Voll, in cooperation with the companies Staufen Pharma and Wala, developed “Nosoden tests”, which are test substances for EAV screening manufactured in homeopathic dilution.

​Dr. Voll also researched the TCM idea that teeth are energetically connected to organs. Numerous dental charts depicting the interrelationship between teeth and organs have now been published. 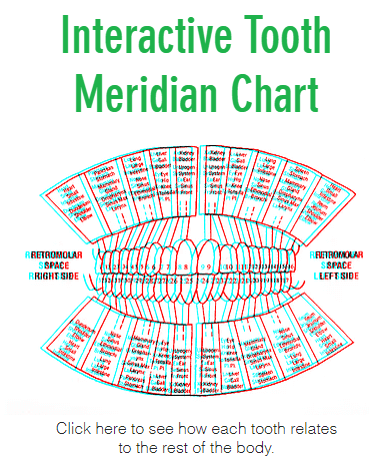 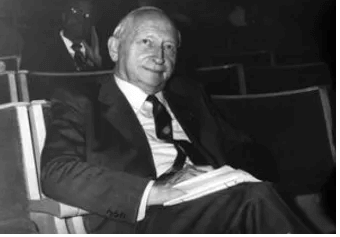 Dr. Voll bequeathed us with a magnificent system of timely, inexpensive, and effective bedside evaluation. His discovery continues to unfold in the realm of biophysics and energy medicine. 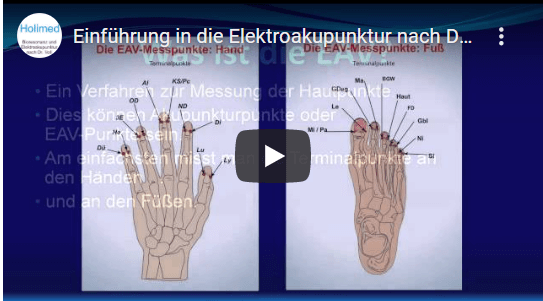 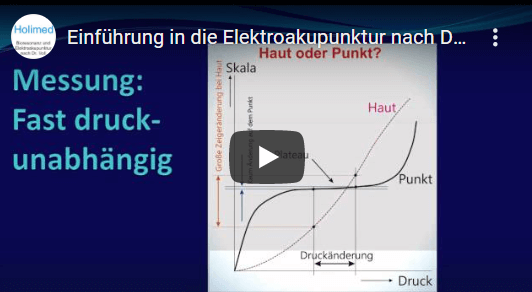 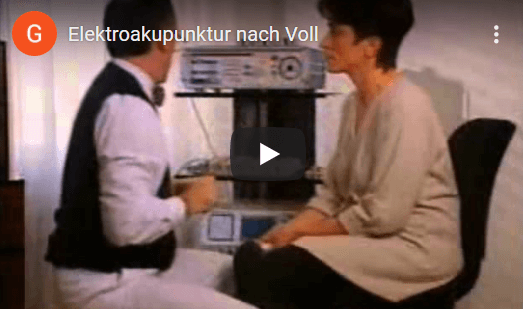 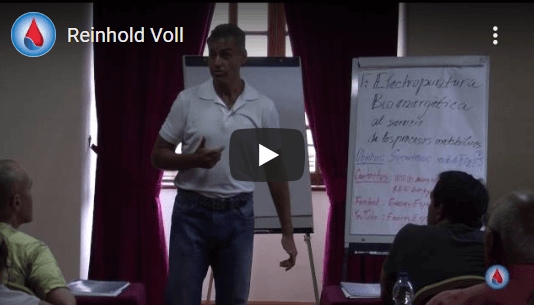